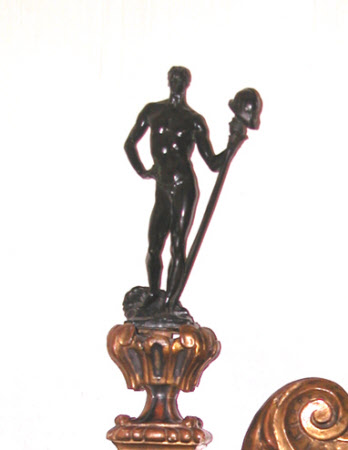 Bronze, David, maquette for the Machine Gun Corps Memorial, Francis Derwent Wood (1871-1926), c. 1922-25. A bronze statuette of David, a maquette for the main figure in Derwent Wood’s Machine Gun Corps Memorial on Hyde Park Corner, London. The standing figure, naked except for a narrow loin cloth, right hand on hip, left holding a long sword, on the hilt of which is placed a helmet. The sword quillon is separately cast and attached. On an integral rectangular plinth with the ground rising behind. At the back, the artist’s signature. The statuette of David and its accompanying figure by Derwent Wood (NT 515100), today adorn the bedposts of Lord Fairhaven’s bed.

Derwent Wood’s final and most famous work, the Machine Gun Corps Memorial situated at Hyde Park Corner, was also his most controversial (for the Memorial, see Crellin 2001, pp. 81-84). Unveiled on 10 May 1925, the monument has at its centre a monumental nude figure of the Old Testament hero David holding a sword with, in the bays on each side, assemblages in cast bronze, which consist of precise casts of machine guns on their tripods, together with folded kit, helmets and heavy wreaths. In addition to its primary dedication, the monument bears a second inscription from the book of Samuel: ‘Saul hath slain his thousands but David his tens of thousands.’ Referring to machine guns as mechanised instruments of death, the secondary inscription caused much controversy, being perceived as unnecessarily triumphalist and facing calls in the months following the unveiling for its replacement with a more neutral text. Sarah Crellin has more recently argued that the inscription should be read as resigned acceptance of the tragedy of the first War, and that Wood believed that ‘if war memorials must be made, they should not evade the carnage of conflict. The monument teeters ambiguously between the glorification and the pathos of war.’ (Crellin 2004, 2010). Derwent Wood studied in Germany as a young man and had many German friends, so he would have been more conscious than many of the suffering endured by humans on both sides of the conflict (Withey 2015, p. 53). Work on designing the memorial had begun by 1921. A preparatory sketch for the memorial in the Victoria & Albert Museum, London (inv.no. E.889-1945) shows David standing with the head of the giant Goliath at his feet. The figure is very similar to the bronze, except that the head of the giant has been substituted by the amorphous mass behind the figure’s feet, and a helmet more clearly rests atop the sword. A scale model for the monument was exhibited at the Royal Academy in 1925 (no. 1347) and is recorded in a photograph (Withey 2015, p. 134, no. 196). The figure of David now at Anglesey Abbey is important in the context of the design of this major monument, since it represents an early stage in the design of the Machine Gun Corps Memorial and may be directly connected with the scale model exhibited at the Royal Academy in 1925. The figure of David in the model is identical to the Anglesey Abbey figure. The RA catalogue does not specify the medium of the model; whilst it is clear that the base must have been in plaster, it is not evident whether the figure of David surmounting it was also made of plaster, or was a bronze cast. If the latter, then it must, on the evidence of a letter from the sculptor’s widow discussed below, be the same, whilst if the RA model was in plaster, then the statuette is a unique bronze cast from it made for Derwent Wood. Lord Fairhaven bought the small bronze figure and an accompanying female figure, Truth (NT 515100), directly from Mrs Florence Derwent Wood (1873-1969), the widow of the sculptor. The purchase must have been made some time between 1929, when Urban Broughton was created first Baron Fairhaven following the death of his father, and before 1932, when both figures are listed in an inventory of the works of art at Anglesey Abbey. A letter from Mrs Wood in the archives at Anglesey, dated 15 January but unfortunately without the year specified, addresses the recipient as Lord Fairhaven and thanks him for purchasing the two statuettes, Florence Derwent Wood adding that ‘I hope they will give you as much pleasure to live with as they have given me hitherto.’ The sale seems to have been mediated by an ‘Oswald’, quite conceivably the painter Sir Oswald Birley (1880-1952), who painted both Lord Fairhaven and his mother Cara in 1925 (NT 515465 and 515466). In the course of her letter, Mrs Wood confirmed that “the ‘David’ and the “Truth” I am sending you are the first casts from the small models for the two large statues of the same name.’ Further confirmation of the connection of the figure of David at Anglesey Abbey with the original model of the Machine Gun Corps Memorial comes when Mrs Wood writes that ‘It would be most interesting to carry out the base of the David in some permanent material and thus have the whole thing complete. It is for future years of much value to see the first inspiration of a work, especially a public monument. It could either be cast in bronze with the steps in marble, or else done in stone.’ Lord Fairhaven does not appear to have responded to this suggestion, which presumably was never taken any further. Also in the 1925 exhibition (no. 1379) was the model of the crowning figure of David, which was much closer to the final figure as it appears on the Memorial (Royal Academy Illustrated 1925, p. 133). In the finished figure, David is wholly naked, the helmet has gone from the sword, and the raised area behind his legs is replaced by an entirely flat base. These changes help to increase the timeless and universal qualities of the figure which, in its conception, looks back to Italian Renaissance prototypes by Donatello and Verrocchio. A half-size figure of David in bronze was exhibited the following year, in 1926 (no. 1299), and was also shown in the 1927 commemorative exhibition at the Royal Academy (Exhibition of Works by the late Sir Hamo Thornycroft, R.A. and F. Derwent Wood, R.A., Winter exhibition, Royal Academy of Arts, London 1927, no. 176). Unlike the larger David, the maquette for the Machine Gun Corps Memorial did not feature in the 1927 RA exhibition, or in the other memorial retrospective exhibition of Derwent Wood’s work, held at the Leicester Galleries (Catalogue of the Memorial Exhibition of Works by the late Francis Derwent Wood, R.A., Leicester Galleries, London 1926). Jeremy Warren 2020

On back of base: F. Derwent-Wood