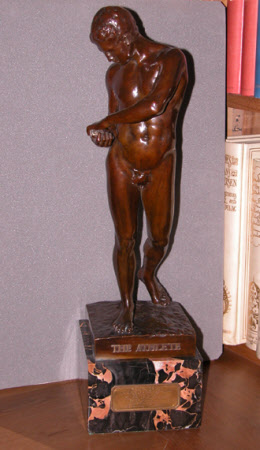 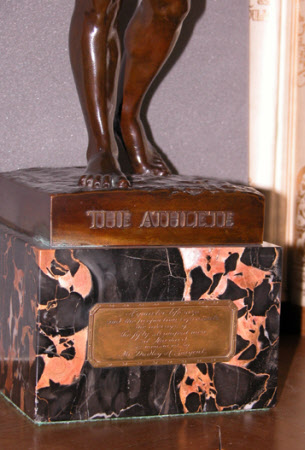 Bronze, The Athlete, Robert Tait McKenzie (1867-1938), cast Roman Bronze Works, New York City, designed in 1903, signed on base ‘R. Tait McKenzie’. A bronze figure of a naked man, entitled ‘The Athlete’, by Robert Tait McKenzie (1867-1938), designed in 1903. The young man is shown moving forward, with weight on right foot, turned to his right and using both hands to take the grip-strength test. On integral bronze base, mounted on variegated marble base. Cast by the Roman Bronze Works, New York City. Signed on base ‘R. Tait McKenzie’. On the front of the bronze base, in gilt-bronze letters, the title ‘THE ATHLETE’. On front of marble base, a plaque with the engraved inscription ‘A quarter life size and the proportion represents the average of the fifty strongest men/at Harvard as measured by Mr. Dudley A. Sargent.’

On surface of bronze base: Copyright/R. Tait McKenzie. On front of bronze base: THE ATHLETE (in separately cast and affixed gilt-bronze letters) On lower edge of bronze base, rear: ROMAN BRONZE WORKS N.Y. Front of marble base, plaque: A quarter life size/and the proportion represents/the average of/the fifty strongest men/at Harvard/as measured by/Mr. Dudley A. Sargent.