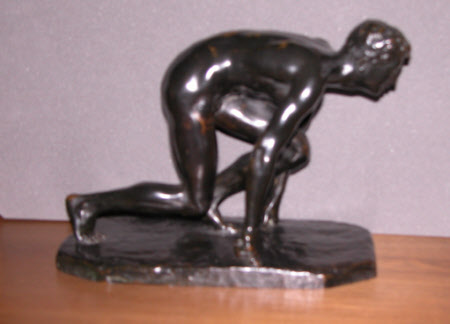 Bronze, Sprinter, Robert Tait McKenzie (1867-1938), 1902, signed and dated on the base by runner’s left hand ‘R. Tait McKenzie 1902.’ Cast by the Roman Bronze Works, New York City. Bronze sculpture of a naked athlete crouching in the ready position, prior to the signal to the start of a race. Mounted on an octagonal bronze base.

The Sprinter was the first major work by the physical education pioneer and sculptor Robert Tait McKenzie. Like The Athlete, an example of which is also at Anglesey Abbey (NT 515046), The Sprinter was inspired by Tait McKenzie’s membership of a newly-formed Society of College Gymnasium Directors (see NT 515046 for more discussion) and was based on the system of anthropometric measurements pioneered by Dudley Allan Sargent at Harvard University. In this case, Tait McKenzie created the proportions for his figure from the arithmetical mean of the measurements of the 74 best sprinters in the United States, which had been collected by Dr. Paul C. Phillips of Amherst College. Several sprinters from McGill University, among them Frederich J. Tees, also modelled for the figure, which Tait McKenzie worked on for three years and which caused him some difficulties, because of his lack of formal studio training. Although the position for the crouching start is a familiar one today, it had in fact been invented only in 1888 at Yale University, by the future diplomat Charles H. Sherrill. The Sprinter was to become Tait McKenzie’s most popular and widely reproduced figure composition. It was exhibited at the Royal Academy in London in 1903 and at the Paris Salon in 1904. Around forty bronze casts are thought to have been made and many more in plaster. One example in plaster was acquired in 1905, along with a plaster of the Athlete, by the Fitzwilliam Museum, Cambridge (Invs. M.1 and 2-1905). A cast had earlier, in 1903, been bought for the White House by President Roosevelt; reporting this, the Boston Globe commented that Tait McKenzie ‘combines to a rare and exceptional degree his love for art with his love for science and athletics… He is perhaps the only living exponent in sculpture of the great athletic spirit which has swept over the world within the past decade and which has become such a conspicuous feature of college education.’Jeremy Warren, 2018