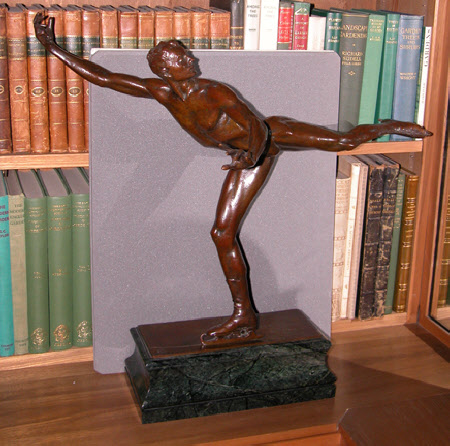 Bronze on bronze and marble base

Bronze on bronze and marble base, Icebird, Robert Tait McKenzie (1867-1938), 1925, signed and dated on the base below skater’s raised left leg ‘ICE BIRD by R. Tait McKenzie 1925.’ Cast by the Roman Bronze Works, New York City. The man is a figure skater, naked except for briefs and his skates; he is shown engaged in a movement known as the outside back spiral, in which he is in fact moving backwards, on his right leg, his left leg held out behind and his right hand extended outwards. He turns his head to look behind him. Mounted on a thin rectangular bronze base, in turn set on a green marble base.

Robert Tait McKenzie (for whom see NT 515046) was from an early age a passionate ice-skater. He turned to the sport as a subject for his sculpture in the 1920s, modelling over four years, 1921-25, a large frieze, Brothers of the Wind, that featured no fewer than eight figures of skaters (Hussey 1929, pp. 46-47, fig. 41). Icebird on the other hand, for whom the model was the Swiss skater Gustave François Lussi (1898-1993), focuses on a single figure about to start a movement known as the outside back spiral. Christopher Hussey explained that: ‘The skater has run forward, jumped, and turned, coming down in this position, and glides left foot foremost. As his speed decreases, he lowers his free foot, gradually bringing it down to form a pivot on which to spin to the final pose on the toes of both feet. Probably few but accomplished skaters realize from the statuette that it represents a backwards movement.’ Hussey went on to suggest that even when we understand the direction of movement, ‘the balance is so exquisitely graceful and rhythmic that the statuette is completely satisfying as an abstract form’ and that it should be looked at with the eyes half-closed, so that once ‘its representational character is dimmed and its association with motion forgotten, the high quality in the statuette will be appreciated.’ (Hussey 1929, pp. 31-32). Jeremy Warren, 2018