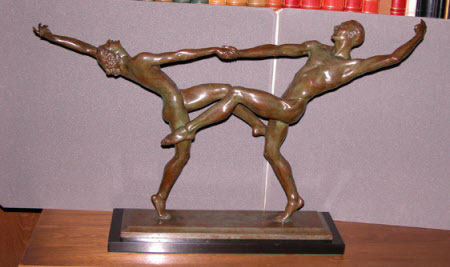 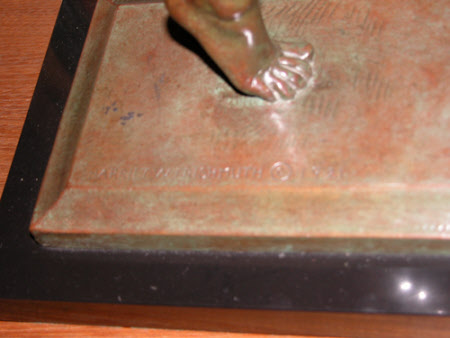 Bronze on black marble base

Bronze on black marble base, sculpture of a man and girl dancing, Harriet Whitney Frishmuth (1880-1980), cast by Gorham Manufacturing Company, 1921, signed and dated 'HARRIET W FRISHMUTH © 1921' and inscribed 'GORHAM CO. FOUNDERS/QBOS'. The naked figures of a young man and young woman, each partner holding the other’s hand and balancing on one leg, their other arm thrown back and other leg held upwards and forwards. Mounted on bronze base with sloping edges, in turn mounted on black Belgian marble base. The artist’s signature and date of the work, 1921, on the front left of the base. Cast by the Gorham Company, Providence, Rhode Island.

Harriet Whitney Frishmuth was born into a well-to-do Philadelphia family and grew up largely in Europe. At the age of nineteen she enrolled in a sculpture class in Paris which was regularly visited by Auguste Rodin, who singled out the young woman’s work for praise. She first exhibited at the Paris Salon in 1903. Frishmuth subsequently spent two more years training in Berlin, before returning to the United States. After further years of study, during which Frishmuth sought to overcome her innate lack of confidence in her abilities, she set up her own studio in New York, in around 1908. She gradually expanded her repertoire to include portraiture, functional objects and the figure groups which were to form the mainstay of her reputation. Frishmuth became particularly known for her focus on celebrating ‘the female figure, with expressiveness of form, pose, and gesture… raised heels, ankles and knees demurely pressed together, shoulders delicately hunched, elbows pulled into the body, and hands bent back with fingers splayed – all conveying messages of coy femininity, vulnerability, and an undeniable sense of narcissistic self-absorption.’ (Janis Conner and Joel Rosenkranz, Rediscoveries in American Sculpture. Studio Works 1893-1939, Austin 1989, p. 37). Frishmuth enjoyed a long and successful career, with a number of major commissions, although the mainstay of her work was the marketing of casts and versions of her works through department stores, galleries and shops. In 1928, Frishmuth’s principal founder for much of her career, the Gorham Foundry in Providence, Rhode Island, published an illustrated catalogue, Famous Small Bronzes, featuring decorative and garden sculpture available for sale at its gallery on Fifth Avenue, New York and by mail order. Harriet Frishmuth had nine bronzes in the catalogue, more than twice the number of any other sculptor, and the prices for her work were also among the highest in the catalogue. The Dancers was one of the nine bronzes by Frishmuth for sale in this catalogue; it would seem likely that Lord Fairhaven acquired his cast around 1928, since the catalogue specifically states that the bronze group was offered on the type of black Belgian marble base to be seen on the example at Anglesey Abbey. At $450, this was the most expensive by far of the smaller casts of Frishmuth’s works offered in the catalogue. The QBOS letters below the foundry mark refer to a system developed by the Gorham Foundry to identify bronzes cast by the foundry. The lettered sequence denotes bronzes that were cast on order for sculptors or other clients and which were often consigned for sale, either at Gorham’s own galleries or other venues (Conner and Rosenkranz 1989, p. 42, note 7; Conner, Lehmbeck and Thayer 2006, pp. 66-68). The Dancers, which had alternative titles of Pas de deux and arantella, was cast in an edition of 58 by the Gorham Foundry. Casts were produced between 1922 and 1933. Because of the exceptionally intricate design of the sculpture, the casting was especially expensive, as seen in the advertised price in Famous Small Bronzes; for this reason, Frishmuth decided in 1933 to close the edition. The Dancers is a typical work from the early 1920s, the period of Frishmuth’s greatest productivity. Her principal model at this time was a Yugoslav-born dancer Desha Podgorska (Delteil) (1900-1980). Desha had a beautifully-proportioned and exceptionally lithe body, able to capture and replicate astonishing poses (Famous Small Bronzes, p. 107, for Desha, Harriet Frishmuth’s final bronze group of the dancer, made before Desha returned to Europe; Conner, Lehmbeck and Tolles 2006, p. 27, fig. 8, for photograph of Desha dancing). Frishmuth once wrote that ‘Most of my figures express motion, and this girl is wonderful. She can do anything I tell her. Some of the poses can only be held a moment but she can reproduce them exactly.’ On another occasion Frishmuth explained how poses could be decided on and seized in an instant: ‘Often I allow the girl to dance and when she falls into a particularly graceful position, I stop her there and begin work.’ (May Brawley Hill, The Woman Sculptor. Malvina Hoffmann and her Contemporaries. An Exhibition of small Bronzes to celebrate the Centennial of the Brearley School, Berry-Hill Galleries, Inc., 24 October – 8 December 1984, p. 19). Desh would in fact often pose to musical accompaniment; Frishmuth was, like other artists at this time, profoundly inspired by modern and classical dance, which saw a great revival of interest in the first decades of the twentieth century, stimulated by Isidora Duncan and other dancers. Frishmuth’s commercial success owed much to her choice of dance subjects in her work, especially in the 1920s. The Dancers, for which Desha and the dancer Leon Barté were the models, shows two figures at the moment of ecstatic physical climax in a dance sequence. It is the most dramatic of all Frishmuth’s male and female compositions, embodying the power of the dancers but also the grace of their complementary movements. The two models posed separately in the nude, using a rope in place of their partner’s hand. After modelling the individual figures, Frishmuth then had the two models pose together, this time clothed, to allow her to complete the modelling of the joined hands. The text accompanying a photograph of the sculpture in Famous Small Bronzes explained in fulsome tones: ‘Musical, indeed, this lovely group, for with the laughter and gay abandon of these joyous dancers, one can almost hear an accompaniment of the wild harmonies to which they whirl. Balance, delicate poise, and the expressive beauty of the human figure, all so characteristic of Harriet Frishmuth’s art, are here displayed in pleasing harmony.’ Jeremy Warren, 2018

On surface of base, at front left: HARRIET W FRISHMUTH © 1921 On side of base, below woman: GORHAM CO. FOUNDERS/QBOS