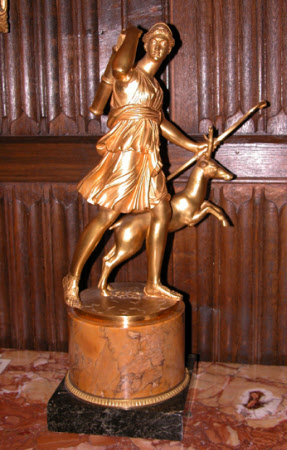 Gilt-bronze, Diana the Huntress, French School, after the antique, c. 1800-20. A gilt-bronze figure of Diana the Huntress, wearing a short chiton dress, tied at the waist. She strides forward, accompanied by a leaping stag, and is in the act of pulling an arrow from her quiver to fit into her bow, held in her outstretched left hand. On a circular gilt-bronze base, mounted on a socle made of breccia nuvolata and verde antico marble. A pair to a figure of the Apollo Belvedere (NT 514994).

A pair with the similar figure of the Apollo Belvedere (NT 514994). The two children of Jupiter and the nymph Latona, Apollo and Diana were among the twelve major gods of Olympus. Diana was variously goddess of the earth and the moon, often personified as a virgin huntress, roaming the forests. This statuette is closely based on one of the most famous antique images of the goddess, the marble statue known as the Diana of Versailles, which is first recorded at the Chateau of Fontainebleau in 1586, but was moved to the Louvre in Paris in 1602 (Francis Haskell and Nicholas Penny, Taste and the Antique: The Lure of Classical Sculpture 1500–1900, New Haven/London 1981, pp. 196-98, no. 30, fig. 102). Subsequently Louis XIV had it transferred to Versailles, but it was brought back to Paris at the Revolution, becoming one of the highlights of the Musée Central des Arts (later to become the Musée Napoléon, and then the Musée du Louvre), which opened in 1800. Now known to be a Roman copy of an original by the Greek fourth-century B.C. sculptor Leochares, the Diana was one of very few ancient marble statues outside Italy which had a reputation equivalent to the treasures of Classical art to be seen in Rome. It was frequently copied, at full size (e.g. by Barthélemy Prieur, bronze, 1605, Chateau of Fontainebleau; Hubert le Sueur, bronze, 1634, Windsor Castle) and more frequently on a small scale in a variety of media, especially from the second half of the eighteenth century. From an early date the Diana was paired with the Apollo Belvedere, both in writings on classical sculpture and as copies such as the present pair of statuettes. This fine pair of Apollo and Diana are characteristic examples of the refined bronzes, often gilded, made during the Empire period. Empire style was especially fashionable during the period c. 1800-15, when Napoleon Bonaparte had himself crowned emperor of the French, although it continued to be popular into the 1820s. Empire style is strongly Neo-classical, taking its inspiration from the art of ancient Greece and Rome, but interpreting it in an extremely pure and refined manner, as can be seen from this pair of bronze statuettes – see for example the little head on one end of Diana’s bow. The statuette copies the marble original closely, with just two major differences; in the Roman marble the body of the deer emerges from a tree trunk needed as a support for the marble figure, whereas in the bronze no support is necessary and the animal is depicted in its entirety; the bow is missing in the ancient marble. Both the Diana and the Apollo Belvedere, which had been taken from the Vatican by the French in 1797, were on show in Paris in the Musée Napoléon during the period 1800-15, when the fame of both the statues would have ensured strong demand for small paired versions. A very similar figure of Diana is seen mounted on an Empire clock, probably made by the Paris firm of Feuchère and Fossey around 1825, recorded in a lithograph (Hans Ottomeyer and Peter Pröschek, eds., Vergoldete Bronzen. Die Bronzearbeiten des Spätbarock und Klassizismus, 2 vols., Munich 1986, I, p. 398, fig. 5.18.14). Jeremy Warren 2019