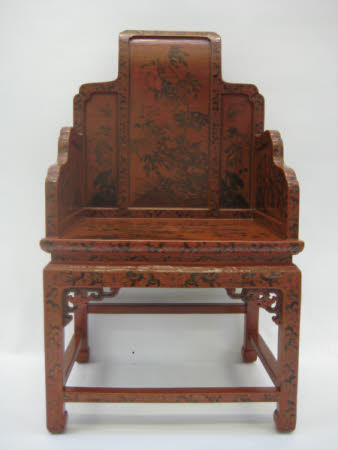 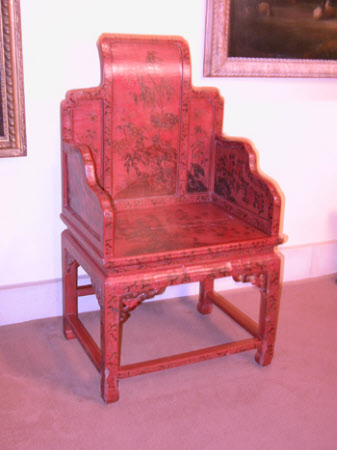 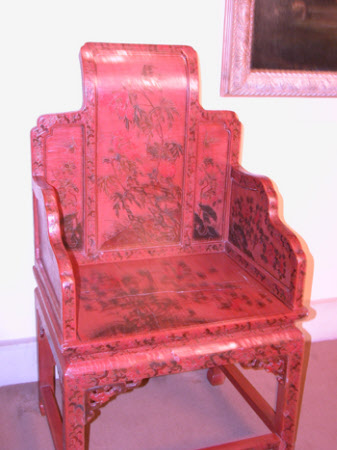 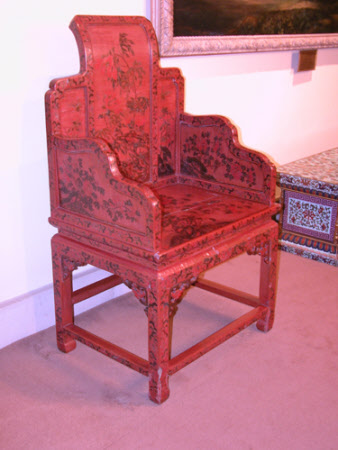 One of a set of four incised red lacquer armchairs, Chinese, Qianlong Period, circa 1740-1750. Each with a three panel back, the larger central panel curved and with down swept shaped panelled arms and a panelled seat raised on square section legs and scroll feet tied by stretchers. Spandrels to the top of the legs modelled as stylised dragons. In red qiangjin lacquer profusely decorated with flowers and birds.

These chairs and a side table (NT514538) were purchased by Lord Fairhaven from Spink & Son Ltd. King Street, St James' London SW1 in January 1959. A letter from Spink dated 9th February 1959 reads 'We have pleasure in sending herewith the oblong lacquer table, en-suite with the four armchairs recently purchased by your Lordship and would thank you for deciding to acquire this table with the four chairs for a lump sum of £2,000.' Another letter received from Carl Winter MA, Director of the Fitzwilliam Museum, Cambridge on 5th February 1959: 'All I have been able to find out from Sotheby's is that the four 18th century Chinese vermillion lacquer armchairs were sold by them as lot 175 in their sale on the 12 December 1958. I see from our priced catalogue that this lot was bought by Spink for £400. Lot 174 was a pair of similar cabinets and lot 176 a similar table...lot 176 was bought by Spink for £300. The items were part of a consignment sent for sale by a dealer, whose name is not disclosed, but who apparently had the furniture sent from China. It appears not to have been seen by or known to anybody in England before the sale. Hence the proper retail market value of such a rare thing is rather difficult to assess. Doubtless if they had come from a famous English collection and not been sold at an end of season auction, they might well have fetched a great deal more.' It is unclear whether Lord Fairhaven was happy with the purchase price from Spink but he obviously enquired via a third party. The profit Spink added to the auction hammer price was quite considerable and it should be noted that the chairs appear to be in original condition and are unlikely to have undergone any significant repair or restoration, particularly in the short time from purchase to delivery to Anglesey Abbey. The only other comparable set of chairs to have appeared on the European market were included in the 2013 Spring selling catalogue for Mallett & Son, London & New York (pp.126-129). The author notes that this pattern of chair has been traditionally dated to the Wanli period (1573–1620) in the Ming Dynasty. However recent research now dates them to the Qing Dynasty, during the middle years of the 18th century, as discussed by Michel Beurdeley ‘Chinese Furniture’ Tokyo 1979. (James Weedon, February 2020)

Sold Sotheby's December 1958 lot 175, purchased by Spink & Son Ltd. Purchased by Lord Fairhaven from Spink in January 1959. Bequeathed to the National Trust by Huttleston Rogers Broughton, 1st Lord Fairhaven (1896-1966) with the house and the rest of the contents in 1966.