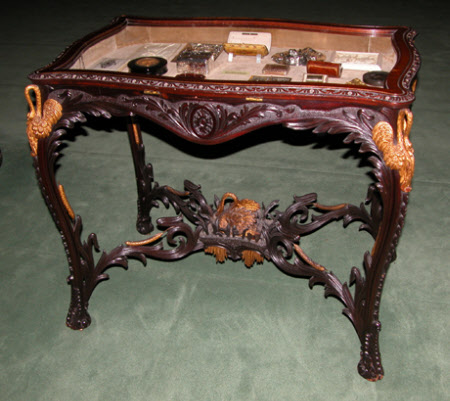 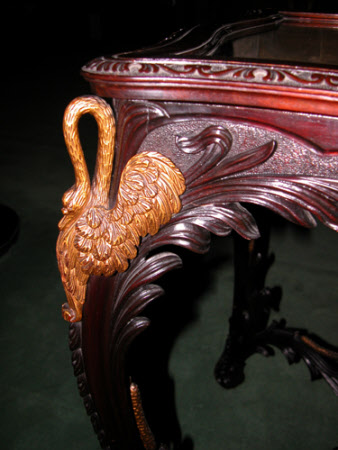 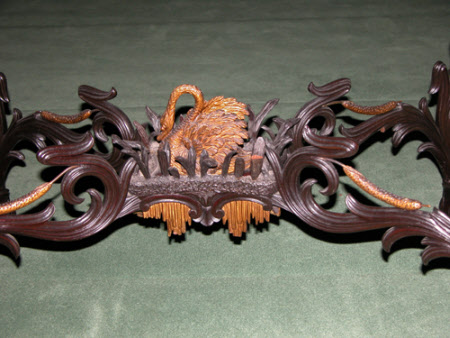 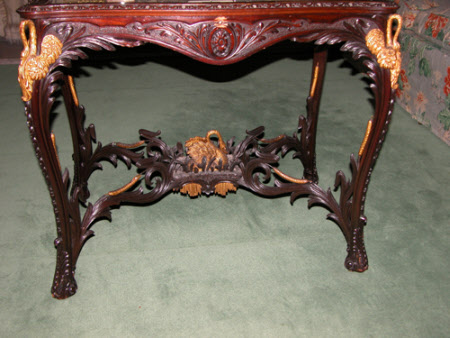 A mahogany and parcel gilt bijouterie table or display table, by Edwards and Roberts (1845-1899), London circa 1900 The hinged glazed lid with serpentine edges enclosing a padded well and raised on cabriole legs and an X stretcher. The whole profusely carved with floral scrolls and swans and bull-rushes. Stamped 'EDWARDS&ROBERTS' to the front edge of the display compartment. Label underneath 'Ideal Home Furnishers, Trowbridge'.

Edwards & Roberts was founded in 1845, and had premises at 21 Wardour Street London. By 1892 they occupied more than a dozen buildings in Wardour Street, where they continued to trade until the end of the 19th century. They became one of the leading London cabinet makers and retailers working in a variety of styles, both modern and revivalist, British and European. Their business also involved retailing, adapting and restoring the finest antique furniture and there are many examples of earlier furniture with later embellishments bearing their stamp. Their trade card stated “Edwards & Roberts, 21 Wardour Street, Antique and Modern Cabinet Makers and Importers of Ancient Furniture”. Wardour Street became an important furniture retailing area in the second half of the 19th century. The firm carried a fine and complete library of the old designers (i.e. Chippendale, Adam, Hepplewhite and Sheraton). They ceased trading in 1899 . See: Wainwright, Clive June 1978, pps. 95-105. James Weedon (October 2017)