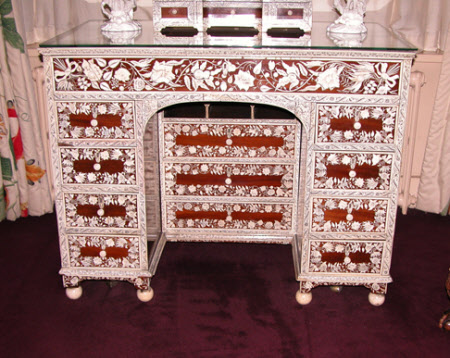 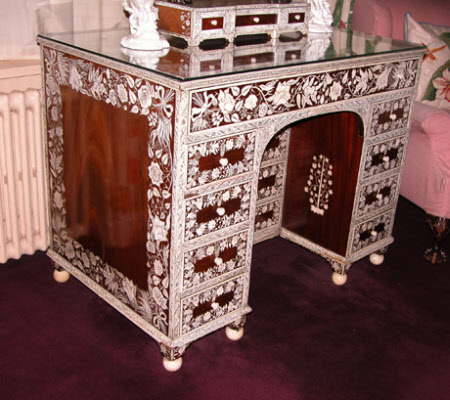 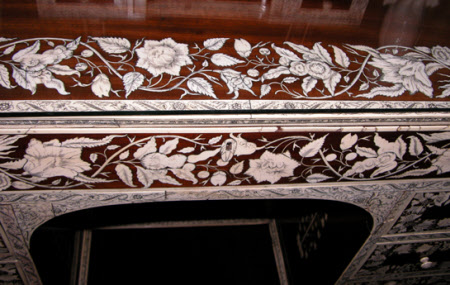 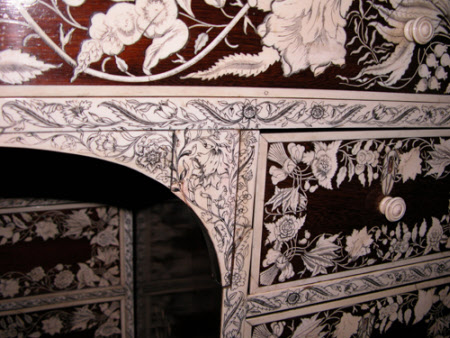 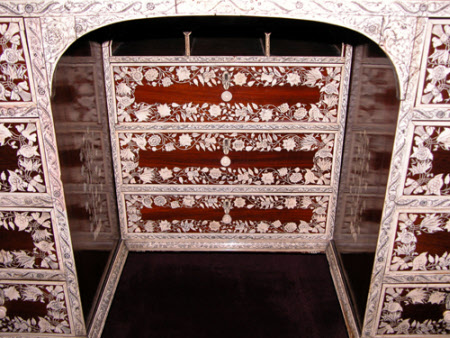 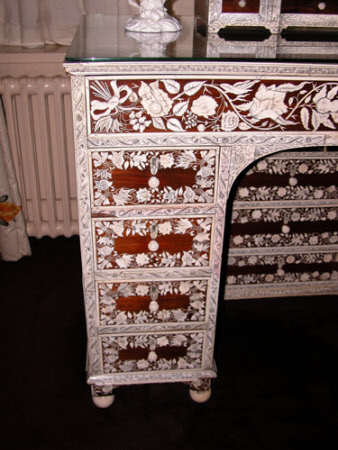 An ivory inlaid and engraved ivory cross banded padouk dressing table, Indian, Vizagapatam, circa 1770 The rectangular top above a long fitted frieze drawer and four short drawers to each side of the kneehole, the recess fitted with three open compartments and three further drawers, all with turned ivory handles, raised on squat brackets and turned spherical ivory feet. The whole inlaid and cross banded with engraved designs of scrolling foliage, flowers, ribbons and ivy.

This dressing table is inspired by English models produced circa 1725-1750. It was made at Vizagapatam, a port on the east coast of India famous for its fine cabinet work. The maker has decorated the face of the dressing table with a combination of ivory inlay and ivory veneer in a style of the 1750s. 1760 to 1780 was a period of transition between the two techniques practiced by Vizagapatam workshops. The use of ivory veneer gave makers a greater degree of flexibility. They could decorate more freely and easily by engraving on ivory than by inlaying ivory into a wooden ground, both techniques are present here. A similar example is in the Clive Collection, Powis Castle, Wales - National Trust collection NT1180668 which was acquired by Robert Clive (d.1774). Clive served a number of terms in India, first travelling to Madras in 1744 as a writer or clerk in the East India Company though distinguishing himself in military actions, and then serving in Bombay (1755-60) and Bengal (1765-67). The dressing- table, with a closely matching though not integral toilet-glass, must have been acquired in his first or second term of service since it is recorded that the feet were replaced by the London cabinet-maker George Bradshaw in 1761. Other closely related writing and dressing-tables include: one sold Sotheby's, New York, Property from the Collection of Lily and Edmond J. Safra, 3 November 2005, lot 144 also executed in padouk, it features similar marquetry with large flowers and tied ribbons to the corners. It was acquired from Mallet & Son in 2002 and was illustrated in Lanto Synge, Mallets Great English Furniture, 1991, p. 184, fig. 210. See also: Jaffer, Amin 'Furniture from British India and Ceylon' V&A publications 2001 James Weedon (October 2017)