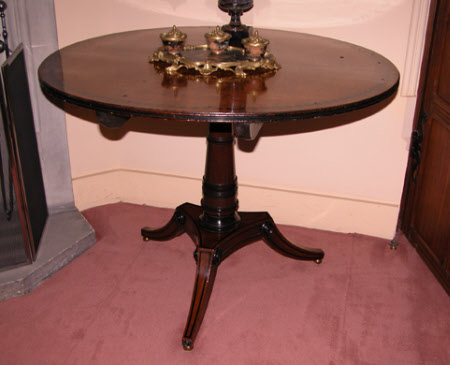 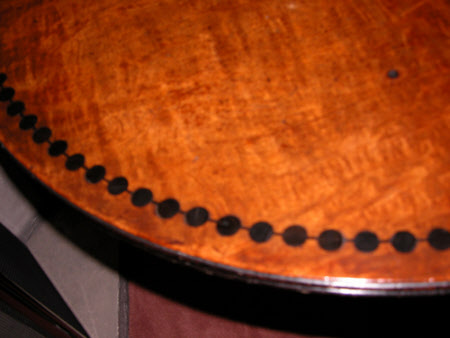 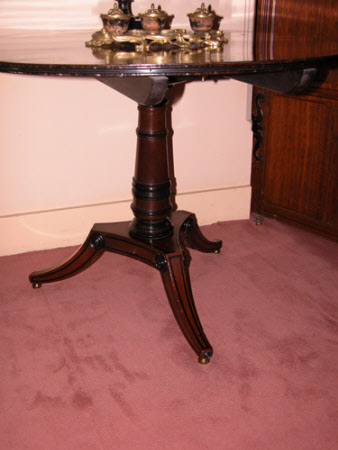 An ebony inlaid mahogany pedestal table, attributed to George Bullock (c.1782-1818), London and Liverpool, circa 1815 The hinged circular top with moulded edge and inlaid with an ebony geometric repeating circular band. Raised on a ring turned column joining a concave triform plinth and three square section tapered sabre legs headed by applied ebony roundels and terminating on brass ball feet. Bearing a brass plaque to the underside of the table 'This is the table of which Napoleon made constant use during his captivity at St Helena' and also bearing the initials 'H.E.B.'

George Bullock (c.1782-1818) Regency period modeller, sculptor, cabinetmaker and furniture designer; Liverpool and London. Bullock was an influential cabinet maker of the early nineteenth century. During his short life he secured an illustrious clientele consisting of the Duke of Atholl at Blair Castle, the Earl of Mansfield at Scone Castle, Sir Walter Scot at Abbotsford and also supplied the furnishings for Napoleon’s home, whilst in exile on the Island of St. Helena. His career started in Liverpool and later took him to London where he was celebrated for his remarkable craftsmanship. In 1815, after his defeat at the Battle of Waterloo, Napoleon Bonaparte was exiled to the remote island of St Helena. The Prince Regent commissioned George Bullock to make some of the furniture and personal effects to be used by the former Emperor. Contemporary reports mentioned furniture and tableware '...provided by Mr Bullock, from the most eminent manufacturers in the kingdom, and consist of the fairest, though not the most extravagant specimens of our own proficiency in the various walks of mechanism and art'. Provenance: Napoleon’s Sitting Room, Old Longwood, 1821; Sir Hudson Lowe; his sale, Phillips 1844; Copling Sale, 1867, lot 249, bought Joovey (?), £2 4s.; [….]; Lord Fairhaven, by whom bequeathed with the collections at Anglesey Abbey, Cambridgeshire, to the National Trust. See: Levy, Martin 'Napoleon in Exile' Furniture History society 1998 - This is probably one of the ‘2 round Mahogany Card Tables’ charged at £22 (see account FHS 1998 pg.109), which are shown in the plan and elevation of the ‘Drawing Room’ (see: FHS 1998 pg.11 fig.5). At the time of Napoleon’s death it was in ‘Gen. Bonaparte’s sitting room’ at Longwood, described in the 1821 Inventory as ‘1 small D [mahogany] round table’, with Lowe's name noted alongside (see: FHS 1998 pg.152). See: Musée de l'Armée, Paris inv.no. 2015.0.144 - A lithograph of a drawing by Napoleon’s valet Louis-Joseph-Narcisse Marchand (Paris, 1791 – Trouville-sur-Mer, 1876), is discreetly titled “interior” almost certainly due to the censorship that befell anything associated with the name of Napoleon during the Restoration. At the back of the room is a table which shares characteristics with this including the inlaid top, pedestal base and the ball feet. Lowe bought ‘1 small table’ back to England on the Dunira (see: FHS 1998 pg. 63). In the Copling Sale this is recorded as: ‘A small mahogany pillar and claw table (often referred to by visitors at St. Helena) on which the private repasts of the Emperor were served; upon it he executed his will and Codicils, and the charred places mark where the pastilles were burned with his own hand (C)’ The letter ‘C’ refers to an identification on Las Cases’ plan. The initials H.E.B. on the brass label have not been identified. There are marks on the table top which are consistent with the burns described in the Copling Sale. (James Weedon 2017)

Underside of table top: 'This is the table of which Napoleon made constant use during his captivity at St Helena' Also bearing the initials 'H.E.B.'