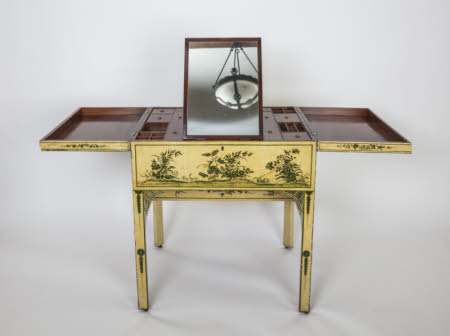 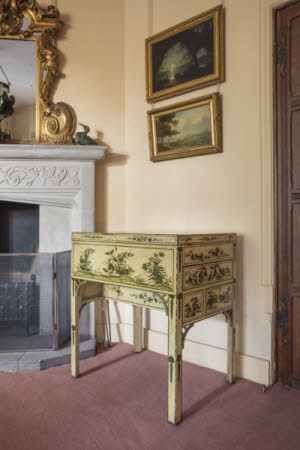 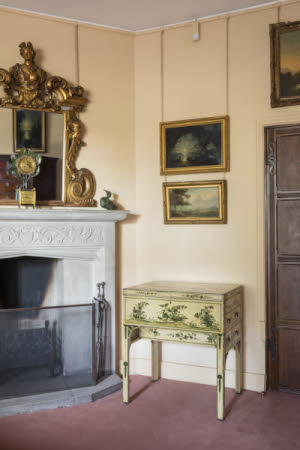 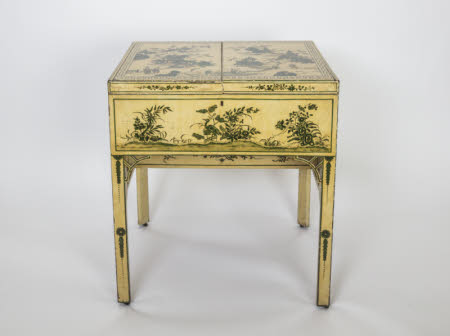 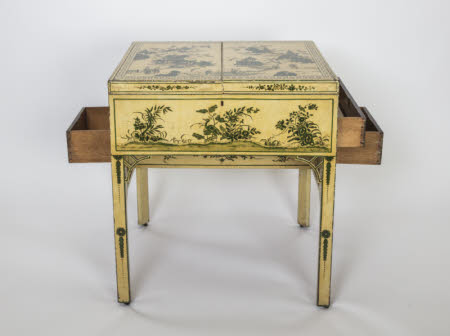 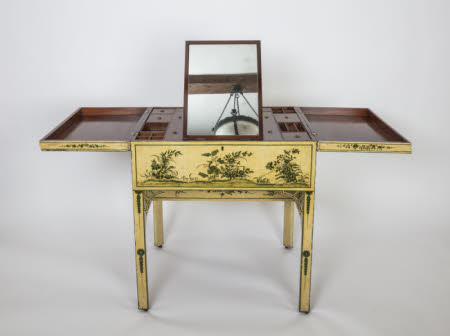 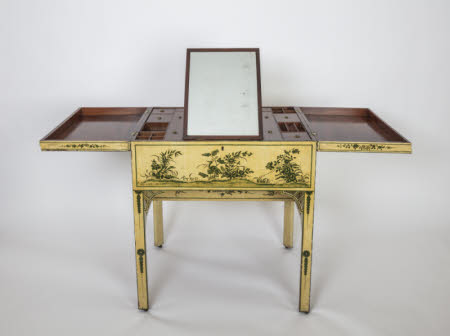 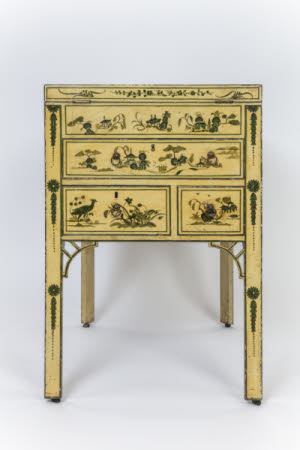 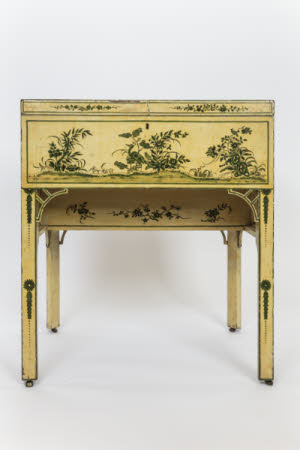 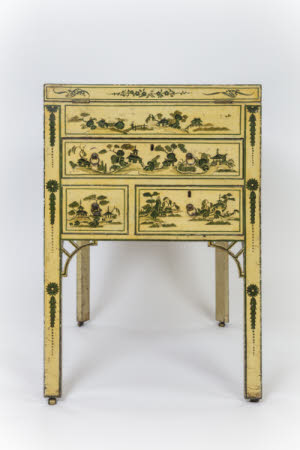 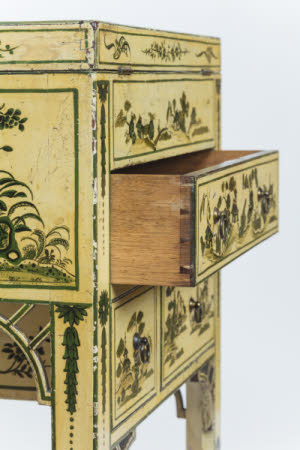 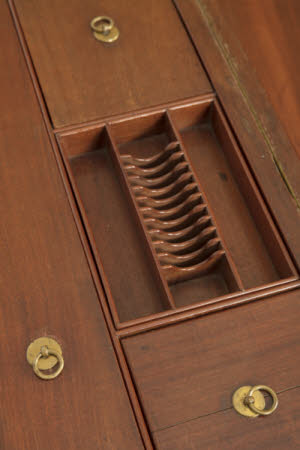 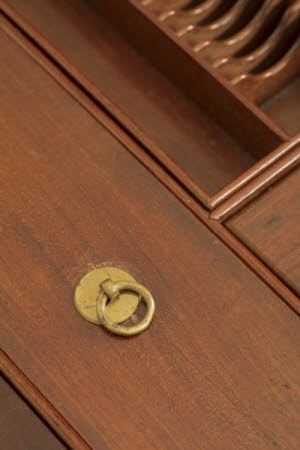 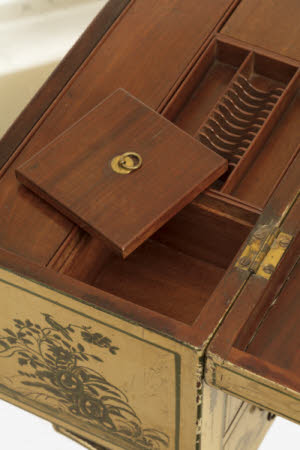 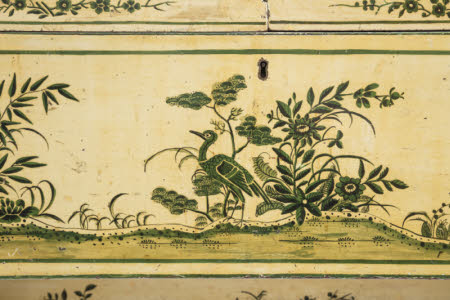 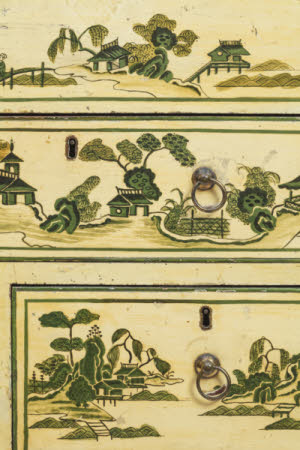 A white and green japanned mahogany dressing table, by Thomas Chippendale (1718 - 1779) London, circa 1775. Ordered and made for the best dressing room at Garrick’s Villa, Hampton, owned by David and Eva Garrick and part of a suite of bedroom furniture supplied by Thomas Chippendale.The dressing table with a double hinged top opening at the centre and enclosing a fitted interior of lidded wells and open compartments for bottles and containers centred by a mahogany framed retractable and adjustable mirror, rising on a ratchet mechanism. With false and true drawers to the sides and raised on square section chamfered legs headed by pierced spandrels or corner brackets, brass casters.The top japanned and decorated with figures and pagodas within landscape scenes incorporating trees and shrubs and framed with a Greek key border. The front and sides decorated with conforming scenes and with foliage and exotic birds. The legs with flower head medallions and bell flower drapes.Glass top for protection.

This dressing table is listed in the inventory of the contents of David Garrick's villa at Hampton, Middlesex in 1779. It was supplied, along with other pieces of bedroom furniture, by Thomas Chippendale (1718-1779) which included a pair of cabinet bookcases, a corner cupboard, two press cupboards and a bed. David and Eva Garrick acquired their riverside retreat at Hampton in 1754. The existing villa was improved by Robert Adam (1728-1792) and the grounds were laid out by Lancelot 'Capability' Brown (c.1715-1783), which included a domed temple containing a statue of William Shakespeare by Louis Francois Roubiliac (1702-1762). The villa's interiors were furnished by Chippendale from 1768 to 1778.In 1778 Eva Garrick complained to Chippendale in a letter that the green and white bedroom furniture was overpriced. She wrote that the decoration cost twice as much as the furniture itself. This suggests that the furniture was ordered before 1775 and possibly supplied in white, but then decorated after 1775, when the Indian chintz bed hangings had arrived and the decoration of the room decided. The green and white painted suite is recorded in the 1779 Hampton inventory. And again in the 1823 sale catalogue when ownership passed to Thomas Carr, after Eva’s death, and remained in situ until the auction sale of 1864 when the collection was split up. Owing to their well-advertised association with the famous actor many items were purchased by his descendants and admirers and can still be identified. The 1779 inventory lists the table as the ‘lady’s commode toylet, with glass, boxes and partitions, drawers and c complete’ it is known to have come on the London market in 1953 and it is quite likely that this is when Lord Fairhaven purchased it for Anglesey Abbey were it has remained since. The V&A collection includes three items from the Garrick suite including the bed (museum no.W.70-1916) a clothes press (museum no.W.22:1 to 8-1917) and a bookcase (museum no.W.14:1 to 4-1994) See also: Gilbert Christopher 'The life and work of Thomas Chipendale' Studio Vista / Christie's 1978. vol.1 pgs. 236-248 & vol.2 plate nos.423 & 424. The furniture of David Garrick's bedroom, Arcitectural Review, XLIII pgs. 31-33 James Weedon (October 2017)