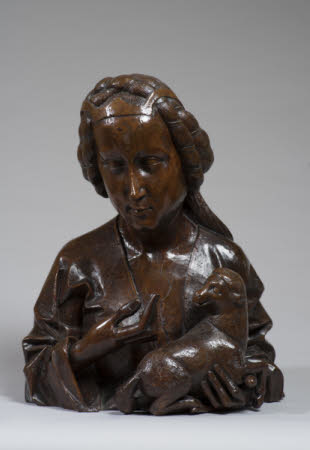 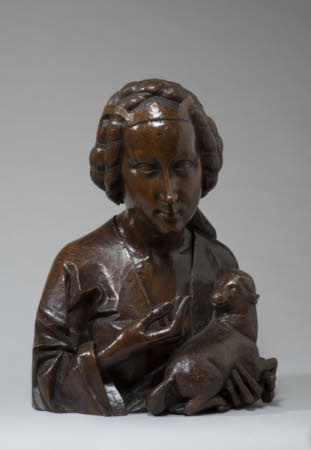 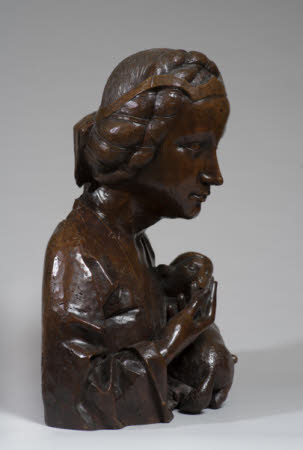 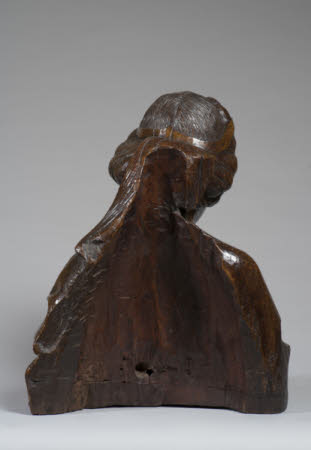 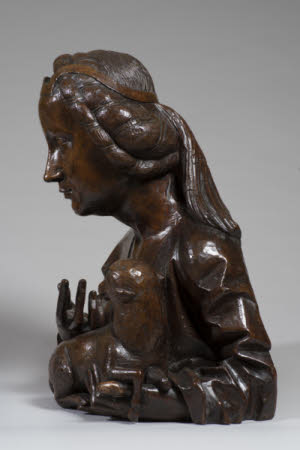 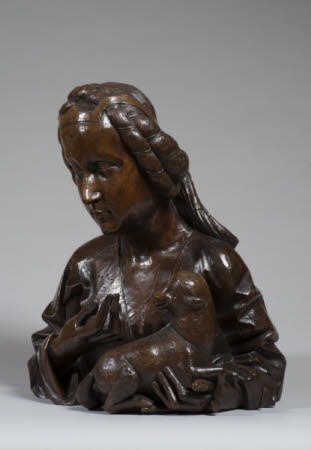 Walnut, reliquary bust of St Agnes, workshop of Niclaus Gerhaert von Leyden (North Netherlandish, born c. 1430, active Strasbourg, c.1462-died 1473, Vienna), c. 1465. A carved reliquary bust in walnut wood of Saint Agnes, made in Strasbourg in the workshop of Niclaus Gerhaert von Leyden. The saint is depicted at half length, cradling in her left arm her attribute, a lamb. With her right hand, Agnes gestures towards an oval recess in the centre of her breast, now plugged with wood, which would originally have contained a relic. Her long hair is carefully arranged into long braids bound with a thin ribbon, arranged at the sides of her head and brought back over her forehead, the whole kept in place with a band shaped into the form of a crown at the front. The bust is roughly hollowed out at the back. Most of the saint’s fingers and the lamb’s tail are restorations; the bust’s original polychromy has been entirely stripped off and the surface is now much darkened and blunted with wax and varnish. There is considerable worm damage in places. The bust is one of a set of four reliquary busts of female saints made in the workshop of Niclaus Gerhaert von Leyden in Strasbourg c. 1465, which formerly adorned an altar in the Abbey Church of Saints Peter and Paul in Wissembourg, Alsace. They seem to have been removed from the church in the later nineteenth century, probably c. 1870. Saints Barbara and Catherine are today in the Metropolitan Museum of Art, New York (inv.nos. 17.190.1735 and 17.190.1734) and Saint Margaret of Antioch in the Art Institute of Chicago (inv.no. 1943.1001).

This beautiful life-size carved wooden reliquary bust is a depiction of the early Christian martyr Saint Agnes (c. 191- c. 304 A.D.). Like other early Christian Virgin martyr saints, the well-born Agnes devoted herself to God from early in her short life, rejecting a number of suitors who in revenge reported her to the authorities as a practising Christian. Agnes survived various attempts to kill her before, finally, a Roman officer slew her with his sword. Her bones are today kept in the Roman churches of Sant'Agnese fuori le mura and Sant'Agnese in Agone. Agnes’s attribute of the lamb comes from her name and its close relationship to Agnus, the Latin word for lamb, a creature symbolic of Jesus Christ. Her name further derives from the Greek word hagnē meaning ‘chaste’ or ‘pure’. Agnes is accordingly the patron saint of young girls and of chastity. The bust, acquired by Lord Fairhaven before 1940 as an anonymous sixteenth-century carving, has been recently recognised as the missing work from a group of four reliquary busts of female saints, made in Strasbourg in the workshop of the sculptor Niclaus Gerhaert von Leyden in around 1465. Although very few of Niclaus Gerhaert’s works survive, he is one of the most significant and influential of all late Gothic sculptors. Gerhaert’s very few autograph works, such as the stone sculpture of a pensive man with his head supported on his hand (Strasbourg, Musée de l’Oeuvre Notre-Dame) or the head of a Sibyl (Liebieghaus Skulpturensammlung, Frankfurt-am-Main) are remarkable for their bravura technique and their naturalism. Both qualities may be seen in the Saint Agnes, in which the handling of the carving is extremely sophisticated, with a warm empathy between the saint and the small lamb that she holds. Stylistic features that mark the bust as a product of Niclaus Gerhaert’s workshop include the long oval faces, the rounded and slightly projecting chin with a dimple, a slender, quite sharply pointed nose, heavily-lidded eyes and high-arched eyebrows and the smallish mouth, set in a grave, enigmatic smile. As well as the Saint Agnes, the group includes similar half-length busts of Saints Barbara and Catherine (both now Metropolitan Museum of Art, New York) and Saint Margaret of Antioch (Art Institute of Chicago). All four have similar oval recesses in their breast to hold relics. They were made in the 1460s, when Niclaus Gerhaert was living and working in Strasbourg, for the abbey church of Saints Peter and Paul in Wissembourg (Weissenburg) in Alsace. Although we do not know how the four busts were displayed in the abbey church, it was rich in relics, with relics for all four female saints recorded in inventories. The busts were probably set into a large and elaborate altarpiece, perhaps even the high altar. They form two pairs, Barbara and Catherine, who look outwards and so were probably placed towards the bottom of the altar, perhaps in the predella section, and Agnes and Margaret, who look downward, so would very likely have been positioned a little higher within the structure of the altarpiece. Like almost all religious institutions in France, the abbey church in Wissembourg suffered greatly during the French revolution. It was at this time that its relics are likely to have been lost, along with much of its furnishings. The four reliquary busts may well have survived in the church until around 1870, when plaster casts were taken of them for the Musée de l’Oeuvre Notre-Dame in Strasbourg. In an 1880 inventory of the museum, the busts were described as coming from Wissembourg. They must have entered the art market in Paris in the late nineteenth century, with three eventually finding their way into American museums, whilst the Saint Agnes was acquired by Lord Fairhaven from an unknown source between 1932 and 1940. The survival of the plaster copy of the Saint Agnes allowed the identification of the bust at Anglesey Abbey as the missing fourth reliquary bust (Thanks to Dr Paul Williamson, former Keeper of Sculpture, Ceramics and Metalwork at the Victoria & Albert Museum for drawing attention to the plaster in Strasbourg). Unrecognised at Anglesey Abbey until recently, the Saint Agnes is of major importance as the only work by Niclaus Gerhaert and his workshop in a public collection in the United Kingdom and as a masterpiece of late Gothic sculpture. Jeremy Warren 2020