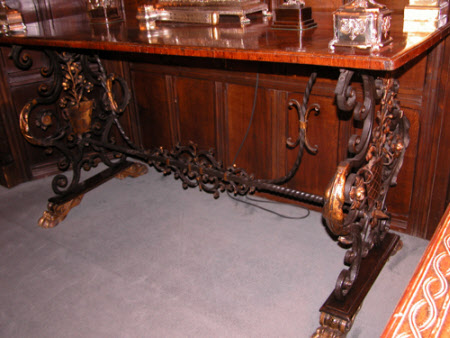 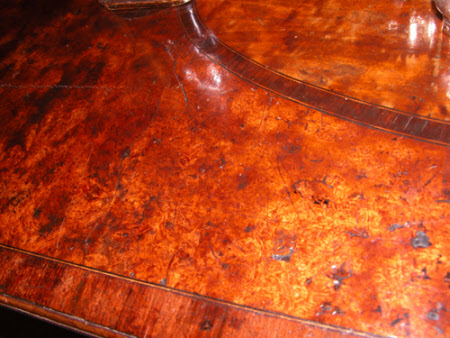 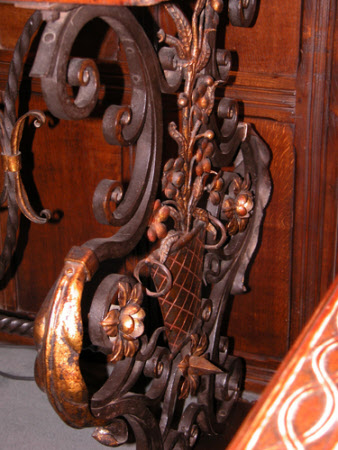 A burr walnut, tulipwood cross banded 'oyster' inlaid and cast iron centre table, English, circa 1720 The top cross banded and inlaid with interlocking strap work centred by an ‘oyster’ flower head motif, the corners with similar inlay. The base with a gilt enhanced wrought iron base with scrolled strap work end supports incorporating baskets of flowers and joined by a twist turned stretcher raised on walnut plinths with giltwood lions paw feet.

See: Adam Bowett - Early Georgian Furniture 1715-1740, Antique Collectors Club 2009 pg.217 The once popular wrought iron side table or centre table base has become increasingly rare. The 1758 inventory of Dunham Massey, Cheshire, records a number of such tables with marble slabs, none of which survive. Tables sold from Castle Howard in 1990 bear some similarities to the table at Anglesey Abbey. The Castle Howard examples were probably made circa 1710 by the blacksmith John Gardham, who also worked at Chatsworth, where in October 1711 he was paid for making 'table frames'. Most examples seem to have then been fitted with marble tops, this inlaid walnut top is therefore unusual. It certainly appears to be contemporary to the base and shows no signs of once belonging to another piece of furniture. James Weedon (October 2017)