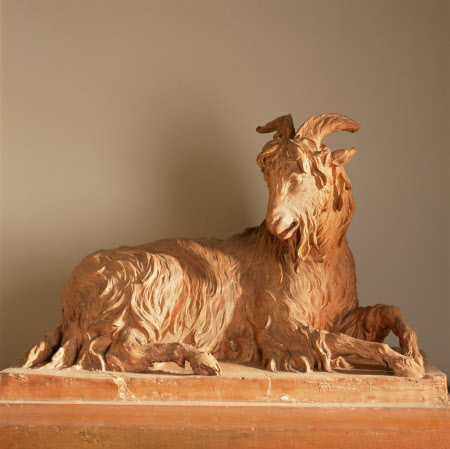 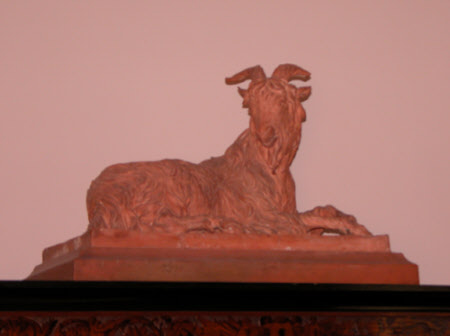 Terracotta, Reclining Goat by John Michael Rysbrack (Antwerp 1694 – London 1770), circa 1730. The goat lies on a rectangular terracotta base, set onto a larger wooden rectangular section. It turns its head sharply to the right and looks backwards. The goat was modelled by John Michael Rysbrack, the finest sculptor in England in the mid-18th century. It is a model for the larger stone statue at Chatsworth House, made by Rysbrack for the garden of Richard Boyle, 3rd Earl of Burlington and 4th Earl of Cork (1694 - 1753) at Chiswick House in west London. The goat was one of a large number of terracotta sculptures sold by Rysbrack to Sir Edward Littleton between 1755-65. Bought by Littleton in November 1765, the goat was damaged during transit to Littleton’s home in Staffordshire. Rysbrack recommended for its repair the sculptor Charles Cope Trubshaw (1715-72), who must have been responsible for repairing the rear right corner of the base, which is made up in plaster.

This brilliant portrait of a goat captures in sculpted clay the essence of a domesticated but still semi-wild pagan animal, with its shaggy fur and slightly malign expression. The terracotta was probably cast from Rysbrack’s preliminary terracotta model or maquette for a stone statue, twice the size, made for the garden of Richard Boyle, 3rd Earl of Burlington and 4th Earl of Cork (1694- 1753) at Chiswick House, but now at Chatsworth. Capricorn (goat) was the zodiacal sign of the Roman Emperor Augustus, whom Burlington much admired. This sculpture is thought to have been made before 1730, but was only paid for in 1749. The model for Rysbrack’s animal was probably an ancient marble which was for a long time a highlight of the Giustiniani collection in Rome, before later passing into the Torlonia collection in Rome (Carlo Lodovico Visconti, I Monumenti del Museo Torlonia, 2 vols., Rome 1885, p. 319, no. 441, Tav. CXIII). The head of the Giustiniani goat was apparently restored by the famous sculptor Gian Lorenzo Bernini (1598-1680). The goat is one of a large group of terracotta sculptures made by Rysbrack for his patron Sir Edward Littleton (c. 1727-1812), for his new house at Teddesley Hall in Staffordshire, which Littleton bought directly from Rysbrack between January 1756 and February 1766. When most of the sculptures were sold at Spink’s in 1932, also sold with the relevant sculptures were the letters between Rysbrack and Sir Edward, which contain much highly interesting information, not only on Rysbrack’s works but on the practice of sculpture, notably the baking and painting of terracotta. The letters were fortunately transcribed and published in a small volume edited by Katherine Esdaile, the leading scholar of eighteenth-century British sculpture at this time. Several letters concerning the Goat must have been acquired by Lord Fairhaven with his purchase of the goat, and were formerly in his possession. Their whereabouts are currently unknown. On 2 November 1765 Rysbrack wrote, in response to a query on the price of the sculpture, ‘You desire to know the price of the Goat, for which I have been Offered Ten Guineas, but will not sell it under fourteen Guineas, as a great Many people have seen it and like it very much. I will rather take the Chance of the Auction, of which I shall give you Timely Notice and send you a Catalogue.’ Littleton responded to this challenge with alacrity and an appropriate offer, since on 19 November Rysbrack wrote to him that ‘I received the favour of Your Honour’s letter of the 6th Instant, relating to the Model of the Goat, which I have sent Yesterday safely packed by the Lichfield Waggoners Clack and Mallet, according to your Direction.’ The price of the Goat was specified as 14 guineas (£14 14s. [£14.70]) plus eleven shillings [55p.] for ‘The Box, and cramps &c.’ Despite Rysbrack’s care, the Goat did suffer damage in transit, to a section of the base and, possibly, the goat’s horns. On 30 November, Rysbrack wrote that ‘I am heartily sorry that any Misfortune has happened to the Plinth of ye Goat, (because it is one of the best things I ever Modelled) and it was packed up as carefully as Possible, but I am much pleased to hear the Damage is not in any of the tender and Principal Parts of the Goat. I know a Friend of Mine Mr. Trubshaw who lives near your Honour has worked for me some Years who will mend it in the best Manner, if You please to give my service to him and acquaint him with it […] Sir, I desire you will not be Uneasy about the Goat, because when Mr. Trubshaw has mended it, it will be just the same as it was before if it be only painted with a thin Coat of the same Colour, so I desire You should rest in Peace.’ Charles Cope Trubshaw (1715-72) was an architect and artist based in Stafford. On 12 December Rysbrack wrote again that ‘I hope by this time the Surgeon have cured the Skin of the Goat and that it is done to Your satisfaction, and that it will not be perceived. When painted, we are surgeons sometimes and heal Legs and Arms as well as they.’ The damage suffered by the sculpture seems to have been to the right-hand rear corner of the base, which is repaired in plaster. There are also breaks in the base at the front left and front centre, whilst the tip of the left ear and the ends of some strands of the goat’s beard are broken off. The right horn has been broken off and repaired more recently. The right leg has a break but is intact. The whole sculpture is covered in a light brown slip paint, the ‘thin Coat of the same Colour’ referred to by Rysbrack in his letter of 30 November. The wooden base is painted in the same slip and is very likely to be original. The underneath of the base consists of wooden deal boards, with indeterminate stencilled patterns in two areas. Jeremy Warren and Alice Rylance-Watson, 2020