Wind Indicator Map of Holy Island and the Northumberland Coast 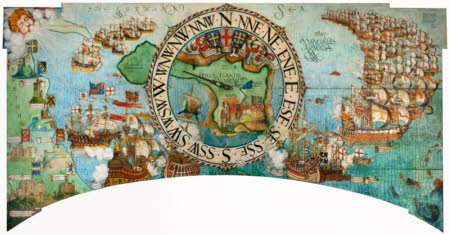 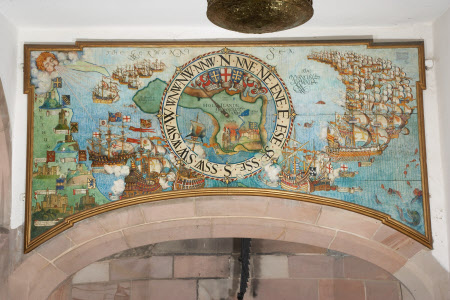 Oil painting on panel, Wind Indicator Map of Holy Island and the Northumberland Coast by Macdonald Gill (Brighton 1884 - London 1947), 1913. A painted wooden wind indicator map of Northumberland of rectangular shape with a base to fit (above) fireplace, with a wind vane in the centre. Painted by Macdonald Gill in the summer of 1913, showing Holy Island in the centre, with Northumberland coast and depictions of various castles on the left and the Spanish Armada fleeing the English shipping on the right.

The painting depicts Holy Island enclosed within a sixteen point compass; a brass pointer in the centre of the work is connected to a weather vane on the roof by a mechanism in the chimney breast and this moves to indicate the varying wind direction. It is a highly detailed and decorative piece, depicting the ships of the Spanish Armada in battle with the English fleet and castles of north Northumberland. Ships include, the Ark Royal, San Martino, Nuestra Senor del Rosari, Santa Anna and Sir Francis Drake’s Revenge. Castles depicted are, Norham, Haggerston, Bamburgh, Chillingham, Dunstanburgh, Alnwick and Warkworth.

The wind indicator was painted and designed by the artist MacDonald Gill, commissioned by Edwin Lutyens. Gill also designed the mechanical parts of the piece. Gill visited the Castle in the winter of 1912 to carry out preliminary sketches with an assistant named Francis Grissell. His original design was rejected by Edward Hudson as not 'ancient enough'. The panel was finished in his studio at Temple Bar, London, probably in July of 1913; given in 1944 by Sir Edward de Stein and his sister, Miss Gladys de Stein in 1944