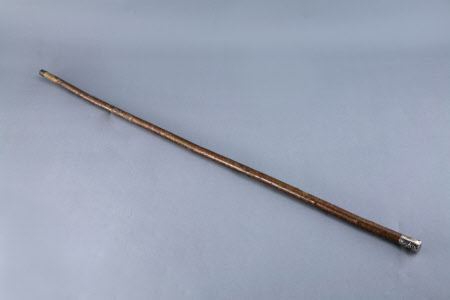 A walking stick with metal piece at the base. Silver top with flat end inscribed with 'mob'; the stick once belonged to Lady Langford (née Mabel Legh).

Lady Langford lived with Mrs Packer in her later years after they became friends when Mrs Packer managed a hotel for her. When Lady Langford died, she bequeathed some of her possessions to Mrs Packer. Mrs Packer gave the items to Lyme at various times but the information was not recorded properly at the time. Confirmed dates of arrival at Lyme are 1992, 1995 and 1999, but for some of the items, it is unclear which date they arrived.

mob / (raised and embossed onto the silver top)