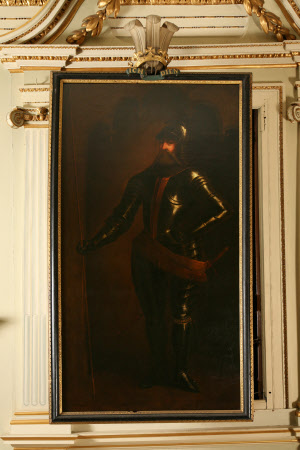 Oil painting on canvas, Prince Edward, Prince of Wales, ‘The Black Prince’ (1330–1375), after Jan van Belcamp (c.1610 - Hampton Court 1653), early 18th century. A full-length portrait of the son of Edward III, facing, standing before an archway cusped with trefoil terminals, as a middle-aged man with long, brown moustache, wearing black, plate armour and helmet (of the sixteenth century type). A tapering, gilt band down the middle of the breast plate. A broad, fringed sash over his hip from which hangs a war-sword. A garter below his left knee bares the words 'Soit qui Maly' (The Order of the Garter). His right arm rests knuckles down on his hip and his left holds a lance. Copied from a portrait now at Windsor Castle.