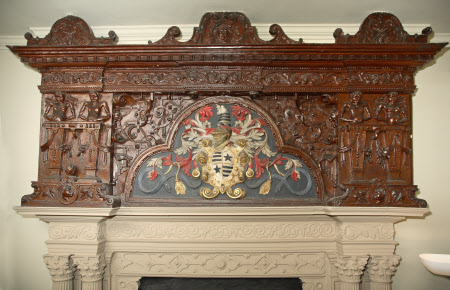 An early seventeenth century, plaster overmantel with flat top with three arches above, the central arch with a female mask; painted brown. Border below with flowerheads and lion's heads surrounded by scrolling foliage. Central panel of the overmantel contains the coat-of-arms of Sir Richard Houghton painted in gold, white, red and blue with white and red acanthus leaves surrounding and strapwork to the top two corners. The two panels flanking the coat-of-arms have tapering columns topped with male and female busts and the figures support the pediment with their heads. The columns stand on a pedestal base that has decoration of two acanthus leaves and a dog's head in profile.

Original to the house. The overmantel may have originally been in the north range of Lyme which until the early eighteenth century, seems always to have held the principal rooms of the house. (taken from Lyme guide book 2000 edition, P.31)