A Guardsman of the Scots Guards (dummy board/silent companion) 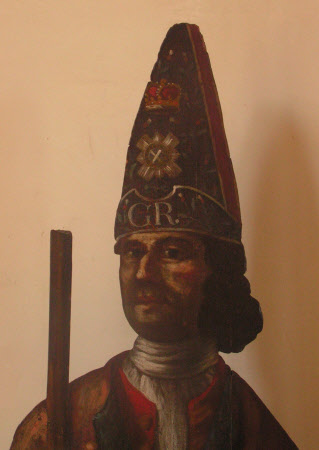 This dummy board depicts a Guardsman of the Scots Guards. It was originally one of a pair and was almost certainly painted by Elizabeth Creed (1642-1728), cousin of the poet John Dryden. The dummy board is on display near a painted overmantel (NT 494927) which was painted between 1708-1717 for Edward Dryden (d.1717) in an effort to establish his credentials as the heir to an ancient family. Dryden commissioned Creed to decorate various parts of the House and Church at Canons Ashby. Dummy boards were usually under life size and so were designed to make a room seem larger than it actually was. The true purpose of a dummy board (sometimes known as a silent companion) is unknown. One theory is that they were used as a form of security to give the impression that the house was occupied, whilst others suggest that they were used as an amusing practical joke to delight guests, or simply as decoration to fill an empty room.

Oil painting on wood (dummy board), A Guardsman of the Scots Guards, almost certainly by Elizabeth Creed (1642-1728). Originally one of a pair. The initials G.R. on the Guardsman’s hat date the board between 1714 when George I ascended the throne and 1717 when the board was included in the house inventory. The date can be further narrowed because of the Scots Guard uniform; the Scots Guards formed in 1715 at the time of the first Jacobite rebellion. Identifiable on the 1717 inventory in the Hall as one of two sentinels painted on wood.