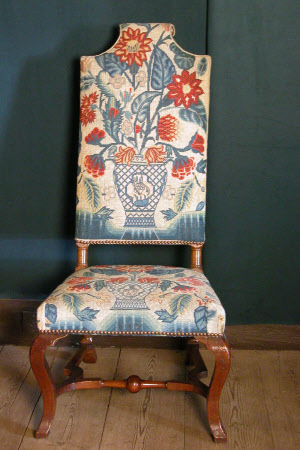 The Sign of the Three Golden Chairs, Strand, London

A chair, or backstool, English, made by Thomas Phill (d. 1727) upholder at the The Sign of the Three Golden Chairs in the Strand, London and purchased by Edward Dryden (d. 1717). One of a set of seven pieces of seat furniture, including six chairs and a probably slightly later sofa [NT 494468.7], and a slightly later firescreen [NT 494468.8]. Magnificently upholstered in contemporary close-nailed linen canvas worked with wool and silk in a pattern of vases issuing bright red flowers and with green and blue leaves. The back of raked rectangular form with raised flat-arched scroll-over top edge, on small turned supports. The seat raised to the front on a pair of angular cabriole legs with a flattened leading edge and block and column-turned raked rear legs, all joined by flat wavy side stretchers and a ball and block-turned central stretcher. --

The chairs in this set have been identified as the earliest document examples made with cabriole legs and, as such, are a highly important survival [Bowett]. The form of the back was probably what was then known as a 'scrowle back'. The bill for the chairs, dated 12th February 1714/15, reads as follows: - For 6 wallnutttree back chaire frames of ye newest fashion Stufft up in Lynnen & ye seats covered a 2nd time att 25s p. piece [sic]...£7.10.0 - for green serge for ye backs of ye 6 Chairs...0.5.6 - for making ye needleworke covers and fixing ym on ye chairs & for sewing silke used about ye same...£1.13.0 - for 17 ¼ yds of gold Colour serge for false caises at 22p[er yard]...£1.11.7½ - for sewing silke tapes and making ye 6 false cases at 2s.6d. p[er] piece...0.15.0 There was no charge for the needlework which covers the seats themselves, so it may be that Edward Dryden had this already and gave it to Phill. The chairs green serge backs were replaced with cotton in 1985 and the gold serge 'false caises' (loose covers) are lost. The total cost of these chairs, including false covers, was just under £2 each. Thomas Phill was paid £47 15s 0d for goods supplied to Canons Ashby between March 1709 and April 1715. He mostly supplied bedding, including calico quilts. On his death in 1727, he was described as 'Upholsterer to Her late Majesty Queen Anne and also George I and II. The sofa and the firescreen are absent from the bill, so it is possible that they were made to match at a slightly later date. Indeed, the needlework is stitched in petit point with pastoral scenes and smaller-scale flowers. None of these pieces are listed in the Canons Ashby inventory in 1717 - perhaps because they were heirlooms - but they were listed in the 'Two Pair Stairs Room' (now the Tapestry Room) in the inventory taken on the death of Sir John, 7th Baronet in 1770. It is interesting to note that Thomas Phill's will, written in 1724 but proved at Canterbury in January 1727, left to his 'sister Shephard all my freehold and copyhold estate in the parish of Everdon in the County of Northamptonshire'. After her death, the estate would devolve to William Folwell. Thomas Phill has never been directly associated with Northamptonshire before, despite the fact that two Joiners' Company apprentices called Phill in the 17th century were of Greens Norton. It is interesting to note here that the Dryden family bought furniture from a London upholder who had links to Northamptonshire already. Everdon is only five miles from Canons Ashby. (Megan Wheeler, August 2018)

Purchased by Edward Dryden (d. 1717) and listed in the inventory of 1770 in the 'Two Pair Stairs Room' (now the Tapestry Room), where they remained in 1921 when the room was photographed by Country Life. By descent, until sold in 1938; purchased by the National Trust in 1983 with the aid of an anonymous benefactor and a grant in aid from the Victoria & Albert Museum.

END_OF_DOCUMENT_TOKEN_TO_BE_REPLACED

The Sign of the Three Golden Chairs, Strand, London (9)