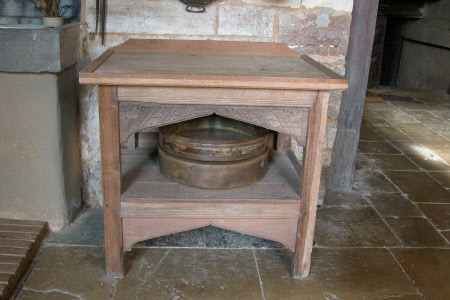 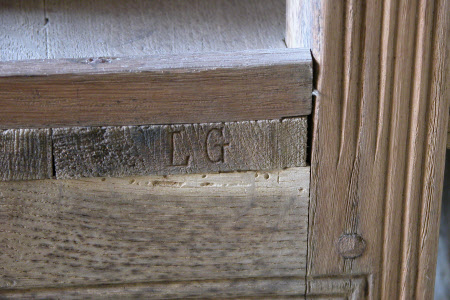 A joined oak two-tier table, or buffet, English, in early to mid-16th century style, made in 1983 by carpenter Leonard Goff of Towcester, Northamptonshire, as a copy of a table which was at Canons Ashby at least as early as the 1890s, when it was drawn by the antiquary Sir Henry Dryden (1818 - 1899) in 1894. The original is reputedly in the Burrell Collection, Glasgow. The rectangular top fitted with a low gallery to the back and with applied edge mouldings, so that the surface is slightly sunken. The rails with run mouldings and the chamfered legs joined by a shelf stretcher, also with applied mouldings to its edges. The upper and lower aprons both shaped as a four-centred arch; the upper apron carved.

Made by Leonard Goff, carpenter of Towcester, Northamptonshire, to replace the original, in 1983. Purchased by the National Trust.

End of a board: LG