A Kitchen Scene and Still Life 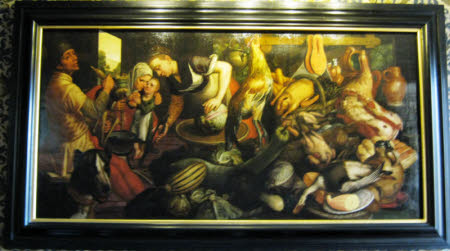 Oil painting on panel, A Kitchen Scene and Still Life by Pieter Aertsen (Amsterdam 1507/8 – Amsterdam 1575). A kitchen scene painted on panel. Four figures to the left, and to the right an array of meat, game, fish and vegetables, and a crowing cock. A dog lower left, and landscape seen through a doorway on the right.

Pieter Aertsen (Amsterdam 1508-1575) and his nephew and pupil Joachim Beuckelaer (Antwerp c.1533-1575) can be considered to be amongst the key figures in the genesis of genre and still-life paintings in the Netherlands. Yet there are barely any works by either of them in public collections in Britain. The National Gallery acquired a set of four Beuckelaers of Market Scenes representing the Four Elements (1569-70) in 2001 and its Aertsen of Scenes from the Life of an Unidentified Bishop is a loan; the Birmingham City Art Gallery has a painting by a follower of Aertsen, called 'Preparations for a Feast', whilst the Ferens Art Gallery in Hull has a 'Fish Sellers' ascribed to Beuckelaer. Yet the houses of the National Trust contain no less than four paintings by the two artists. The finest of these is a 'Kitchen Scene with a Woman making Waffles', by Beuckelaer, at Treasurer’s House, York. There is a later and less good 'Market Woman' with a 'Bird-Handler' by him from the Snayers Bequest at Osterley Park. At Scotney Castle there is his 'A Maid in a Kitchen', with Christ in the House of Mary and Martha in the background, of which there is a variant belonging to the Rijksmuseum, Amsterdam, on loan to the Muiderslot. And, from Grantham House, there is the Aertsen that is the subject of this article. The Scotney picture is the one that best explains the development of Aertsen’s and Beuckelaer’s types of picture. In it, and in other early works by the two, the religious scene – the apparent subject of the pictures – is thrust into the background, whilst a domestic scene affording a pretext for painting a rich variety of elements forming a still-life, occupies the foreground (Velázquez was later also to use this device – but without such a plethora of still-life details – eg. in the 'Kitchen Scene with Christ in the House of Mary and Martha' in the National Gallery). But, by the time of the picture formerly at Grantham House, which appears to be dated 1563, the religious subject has been eliminated altogether, and all that we are left with is a scene of a kitchen piled high with every form of produce (sometimes thought to represent God’s bounty to Man), with a cookmaid, a man with a spindle, a woman with a distaff and child, and a curiously prominent mastiff. (Alastair Laing, ABC Bulletin)

Given to the National Trust by the Misses Winifred and Marion Sedgwick in 1944-50, having presumably been acquired or inherited by their mother, who became the tenant of Grantham House in 1884, and inherited it from her brother in 1924