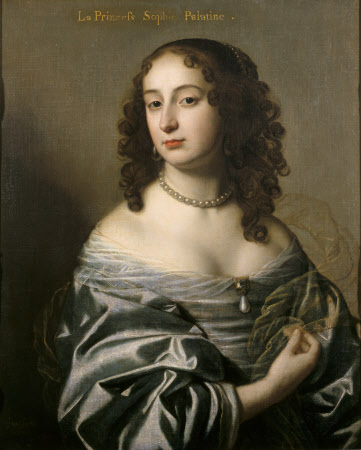 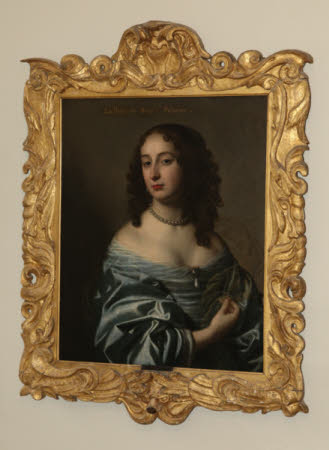 Oil painting on canvas, Electress Sophia, Princess Palatine, consort of Ernest Augustus, Elector of Hanover (1630-1714) by Gerrit van Honthorst (1590-1656), signed and dated "G Honthorst 1650", GH in monogram. Inscribed with name of sitter: La Prinsefs Sophie Palatine. A half - length portrait, head turned to left, right hand holding transparent gold fichu to her body, wearing a blue green dress. Sophia of the Palatinate, commonly referred to as Sophia of Hanover was the Electress of Hanover from 1692 to 1698. She was also an heiress to the crowns of England (later Great Britain) and Ireland, countries she never visited. She was declared heiress presumptive to Queen Anne of England and Ireland by the Act of Settlement 1701, which was passed by the English parliament, and therefore only applied to the Kingdom of England (which included Wales) and the Kingdom of Ireland. A few years later, the Kingdom of Scotland agreed to accept the Hanoverian succession for the new single throne of a new country, the Kingdom of Great Britain that Scotland and England had agreed to unite as, and which came into being under the Acts of Union, 1707. Sophia, a granddaughter of James VI and I, died less than two months before she would have become queen; her claim to the thrones passed on to her eldest son, George Louis, Elector of Hanover, who ascended them as George I. A patroness of the arts, Sophia commissioned the palace and gardens of Herrenhausen and sponsored philosophers, such as Gottfried Leibniz and John Toland. Although considerably older than Queen Anne, Sophia enjoyed much better health. In June 1714, Sophia was walking in the gardens of Herrenhausen when she ran to shelter from a sudden downpour of rain and collapsed and died, aged 83. Queen Anne died a few weeks later at the age of 49. Had Anne died before June 1714, Sophia would have been the oldest person to ascend to the British throne. Upon Sophia's death, her eldest son Elector George Louis of Brunswick-Lüneburg (1660–1727) became heir presumptive in her place, and weeks later, succeeded Anne as George I. Sophia's daughter Sophia Charlotte of Hanover (1668–1705) married Frederick I of Prussia, from whom the later Prussian kings descend.

Coombe Abbey, 1866 catalogue as ' Sophia Princess Palatine'; acquired at the auction of the Craven Collection ay Sotheby's in 1968

Ashdown House, The Craven Collection (acquired by HM Treasury and transferred to the National Trust in 1968)

Signed and dated "G Honthorst 1650", GH in monogram. Inscribed with name of sitter.