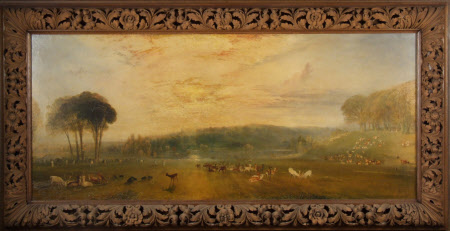 Oil painting on canvas, The Lake, Petworth, Sunset, Fighting Bucks by Joseph Mallord William Turner, RA (London 1775 - Chelsea 1851). A circa 1830 landscape by J.M.W. Turner of the Lake at Petworth at sunset (TATE/(T03883). The lake is across the centre mid-distance, in shadow with the sun's wake touching the margins. The hill and beechwood are on the right-hand side in sun with sheep and deer thronging the slope. At left are six pine trees and a booth with cricketers playing by them and a deer herd across the foreground. Two white bucks are fighting on the right.

Commissioned from Turner by George Wyndham, 3rd Earl of Egremont (1751-1837). Thence by descent, until the death in 1952 of the 3rd Lord Leconfield, who had given Petworth to the National Trust in 1947, and whose nephew and heir, John Wyndham, 6th Lord Leconfield and 1st Lord Egremont (1920-72) arranged for the acceptance of the major portion of the collections at Petworth in lieu of death duties (the first ever such arrangement) in 1956 by HMTreasury. Accepted by HM Government in lieu of inheritance tax in 1956, allocated to Tate in 1984 and on long-term loan from Tate to the National Trust at Petworth.