Landscape with Narcissus and Echo 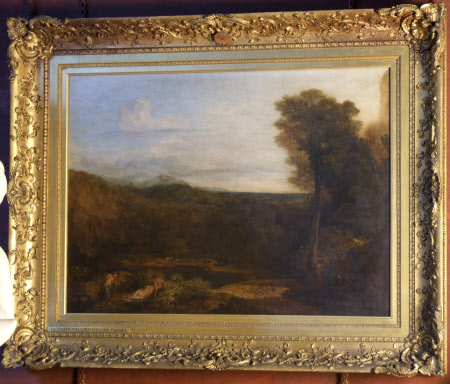 Oil painting on canvas, Landscape with Narcissus and Echo by Joseph Mallord William Turner, RA (London 1775 - Chelsea 1851), 1804. On the right-hand side is a cliff with trees below. In the left foreground are three women on the edge of a pool with Narcissus in the centre kneeling on the far bank. In the left and centre mid-distance are cliffs and a hill with a town by the sea in the centre distance. It was originally exhibited with the following lines, a translation from the Roman poet Ovid's Metamorphoses (Book iii ll. 601–12): “So melts the youth, and languishes away; His beauty withers, and his limbs decay; And none of those attractive charms remain To which the slighted Echo sued in vain. She saw him in his present misery, Whom, spite of all her wrongs, she griev'd to see: She answer'd sadly to the lover's moan, Sigh'd back his sighs, and groan'd to every groan: ‘Ah! youth beloved in vain!’ Narcissus cries; ‘Ah! youth beloved in vain!’ the nymph replies. ‘Farewell!’ says he. The parting sound scarce fell From his faint lips, but she reply'd ‘Farewell!’”

Bought from Turner by George Wyndham, 3rd Earl of Egremont (1751-1837) circa 1810. Thence by descent, until the death in 1952 of the 3rd Lord Leconfield, who had given Petworth to the National Trust in 1947, and whose nephew and heir, John Wyndham, 6th Lord Leconfield and 1st Lord Egremont (1920-72) arranged for the acceptance of the major portion of the collections at Petworth in lieu of death duties (the first ever such arrangement) in 1956 by HMTreasury. Accepted by HM Government in lieu of inheritance tax in 1956, allocated to Tate in 1984 and on long-term loan from Tate to the National Trust at Petworth.

Turner Inspired, in the Light of Claude, National Gallery, London, 2012