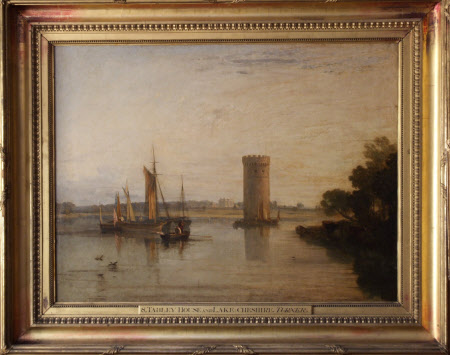 Turner stayed at Tabley in the summer of 1808; but according to a disgruntled fellow-artist there: "His time was occupied in fishing rather than painting." From the visit resulted, nonetheless, this picture and Tabley: Windy Day (Tabley House), painted for the galleries of the Hill Street house of Sir John Fleming Leicester, 5th Bt. (1762 — 1827), and Tabley itself, respectively. Sir John and the 3rd Earl of Egremont (see No.13, Picture Gallery) were close to one another in time and in taste in their patronage of Turner; hence the 3rd Earl buying this at the sale of the Hill Street pictures in 1827.

Oil painting on canvas, Tabley, Cheshire, the Seat of Sir J.F. Leicester, Bt: Calm Morning by Joseph Mallord William Turner, RA,(London 1775 - Chelsea 1851), signed bottom right: J M W TURNER RA, circa 1808. In the foreground is the lake with cows under the bank and at right, sailing boats and at left a skiff. In the right centre a round tower can be seen with sailing boats beneath and in the centre distance, the house. The Morning Herald (4 May 1809): ‘In this felicitous imitation of a calm morning, the Artist has evidently taken Cuyp for his study; and it is but just to aver, that he has preserved the aerial perspective better than any other Artist within our remembrance, at least in this country. There is such repose in the whole composition, each part harmonizes with its adjunct object so happily, that a troubled spirit might dwell upon this picture in contemplation, until the nervous system were re-attuned by quietude, receiving an imperceptible anodyne through the operations of sympathy.’

Painted for Sir John Fleming Leicester, later Lord de Tabley (1762-1827); bought from his sale at Christies, 7 July 1827, lot 34, for 165 guineas by George Wyndham, 3rd Earl of Egremont (1751-1837); thence by descent, until the death in 1952 of the 3rd Lord Leconfield, who had given Petworth to the National Trust in 1947, and whose nephew and heir, John Wyndham, 6th Lord Leconfield and 1st Lord Egremont (1920-72) arranged for the acceptance of the major portion of the collections at Petworth in lieu of death duties (the first ever such arrangement) in 1956 by HM Treasury. Accepted by HM Government in lieu of inheritance tax in 1956, allocated to Tate in 1984 and on long-term loan from Tate to the National Trust at Petworth.