Prometheus creates the first (wo) man, in an Architectural Frame with a painted Statue of a classically dressed Female with a Basket of Fruit on her Head 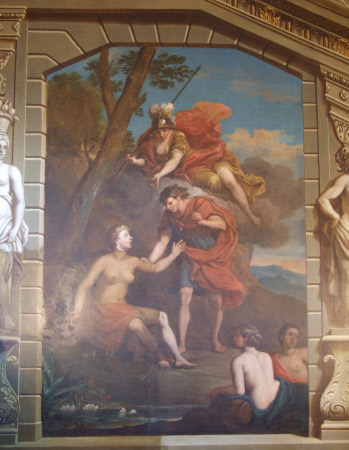 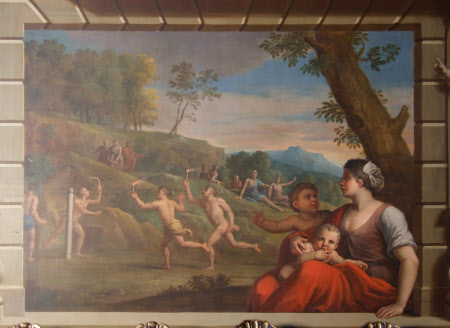 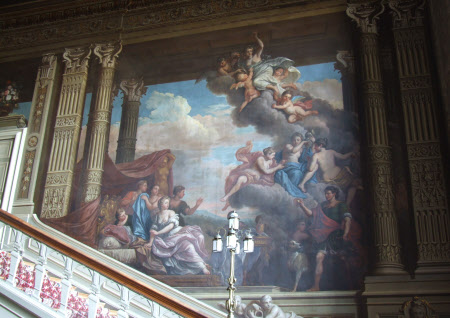 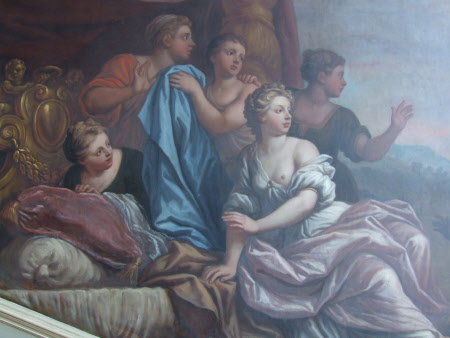 Oil painting on plaster, Prometheus creates the first (wo) man, in an Architectural Frame with a painted Statue of a classically dressed Female, with a Basket of Fruit on her Head by Louis Laguerre (Paris 1663 - London 1721), 1718/20. In a landscape setting, beneath a tree, on the bank of a stream with water-lillies, Prometheus, centre, bends down, to the left, over the seated figure of the 'first man, who is still partially made of clay, above him hovers a helmeted Athena, holding a spear in her right hand and seated on a cloud, she leans forward and points down with her left hand 'breathing' life into the figure. The scene is observed by two water nymphs bottom right. On the left is a painted statute of a female standing on a plinth, she is facing slightly to the right and holds a basket of fruit on her head which she supports with her right hand. Prometheus (forethought) is represented as the great benefactor of Man. He was a Titan, the son of Iapetus and Themis, the daughter of Oceanus. Being a master craftsman, he created Man by moulding figures out of clay he found at Panopea, Athena then breathed life into them. Because of the faults of mortal men Zeus determined to destroy them. He tried to starve them by demanding offerings of the best of their food. Prometheus defeated this by a trick that resulted in Zeus receiving the bones of animal offerings, wrapped in fat, instead of the best meat. Zeus, in his anger, deprived men of fire but Prometheus stole it from Olympus by secretly taking it in the stalk of a fennel plant, and returned it to them. Zeus in revenge caused Hephaestus to make the first woman, Pandora, who would bring misery upon the human race. He presented her with a sealed jar containing all the evils that were ever to plague mankind. The only good it contained was Hope who was at the bottom. Pandora was delivered by Mercury to Epimetheus who had been warned by his brother Prometheus not to accept gifts from the gods. Epimetheus married Pandora. Pandora having been told not open the jar, did so and released into the world a plague of evils - the last to leave was Hope. Zeus then arrested Prometheus and chained him to a rock on Mount Caucasus where by day an eagle consumed his liver, which, because he was immortal restored itself every night. In exchange for some vital information from Prometheus, Zeus allowed his son Hercules to kill the eagle and rescue Prometheus. The stealing of fire for man was celebrated with annual torchlight parades during the Promethian festival. Pandora bore Epimetheus a daughter, Pyrrha, who married Deucalion and, with him, survived the Great Flood. The north wall was painted by Louis Laguerre with scenes from the story of Prometheus.