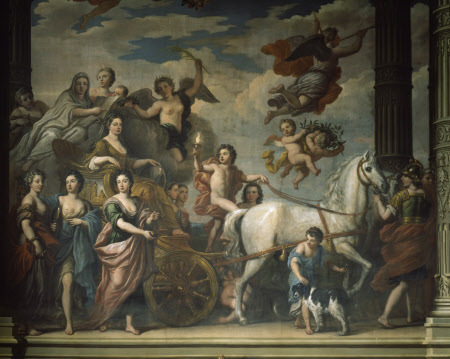 Oil painting on plaster, Triumph of Elizabeth Percy, Duchess of Somerset (1667-1722 by Louis Laguerre (Paris 1663 - London 1721), 1718/20. Lady Elizabeth Percy, Duchess of Somerset riding, through a colonnade of ornate pillars, in a gilded triumphal car drawn by two white horses and surrounded by deities.If she were to make her progress through the colonnade she would eventually arrive at the painting of Petworth House around the corner of the landing. The Duchess's left hand rests on a shield inscribed with the words VIRTUS OMNIA VINCIT - [virtue conquers all] and the side panel of the car carries a bas-relief of 'The Judgment of Paris' (?). On the front of the triumphal car stands her son. Algernon Seymour, 7th Duke of Somerset (1684-1750) as a nude boy wearing a flowing cloak. He holds the reins in his left hand, a small flaming torch in his right and looks back over his right shoulder at his mother.On the left in front and beside the chariot, walk the Duchess's three daughters in allegorical dress as Virtues; Prudence, holding a looking glass and serpent; Temperance in a state of classical déshabille holding in her right hand a horse's bridle and Justice holding a pair of scales. The head of a young man seen between the horses and the left arm of Algernon Seymour could possibly be Percy Seymour, the second eldest son (1686-1721) who died umarried, and the child in a blue robe with the Duchess's spaniel in front of the horses, holding in his left hand a key, (the key to Petworth House? where the triumphal car is headed or does he with the dog and the key (St Peter's) represent Faith or Fidelity), could possibly be Charles Seymour (1688-1710) the third son who died unmarried. A figure (Athena?), wearing armour and a helmet, leads the horses' by their bridles. The horses and and the wheels of the triumphal-car are trampling on the figure of Envy (?). Above the horses are two winged cherubs holding up a a laurel wreath and above them flies a winged Fame blowing a trumpet. Above the Duchess are five figures which form an arch, and above them two more figures holding a spilling cornucopia. Of the five figures, left to right: cherub; a female diety dressed in classical robes, her head covered, holding an open book and pointing to the last page (it has been suggested she is indicating that the Duchess is the last of the Percy line); a young female diety with her face illuminated by a flame which rises from the centre of her hair. She has an infant (?) by her side; a winged female figure of 'Victory' holds a laurel wreath over the head of the Duchess and a palm frond in her raised left hand.