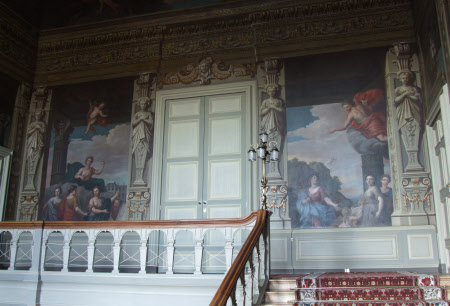 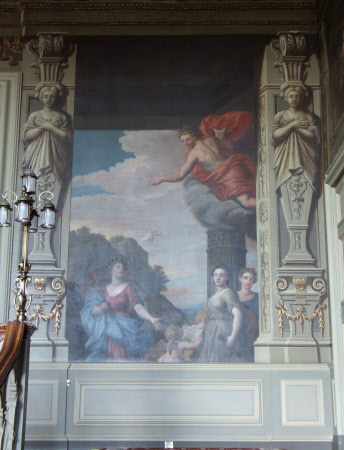 Oil painting on plaster, (Left) Architecture: Venus and attendants, with Petworth House and plans within an architectural frame incorporating two caryatids. (Right) Music: Apollo and attendants, within architectural frame incorporating two caryatids. The landing is painted with depictions of the Muses framed by pilaster with caryatids. First floor landing left of door: Venus and attendants, with Petworth House and plans within an architectural frame incorporating two caryatids. In the background is shown Petworth House as it was at the end of the 17th century, with the dome still surmounting it. In the right foreground a male figure displays a ground plan of Petworth House. To his left are three female dieties in classical robes, the one in the centre holds a plan of a dome in her left hand and points with her right at the ground-plan of Petworth House, the one on the right - Venus ? - also points with her right right at the plan of Petworth House and with her left points to Petworth House in the background, Above these figures on a cloud sits a female deity - Venus - also in a state of classical dishabille, with her left arm upraised holding a pair of compasses, a flying cupid above her. Is this Venus in the heavens and earth? The Duchess of Somerset’s triumphal car and her entourage are travelling through a pillared colonnade which also appears in the adjacent painting over the door and which continues into this painting. Presumably it was Laguerre’s fanciful conceit that the triumphal car would eventually arrive at this panel. It is noted that the capitals of the pillared colonnade are Composite i.e. Corinthian/Ionic with embellishments and, as the usual practice was for Corinthian capitals to be used for temples of Venus, Flora, Proserpine and Water Nymphs, it could be surmised that the Goddess on the cloud with the pair of compasses is Venus, as is the figure (come down to earth) pointing to the House and the plan. First floor landing right of door: Music - Apollo and attendants, within architectural frame incorporating two caryatids In a mountainous landscape (the Muses had their abode on mountains, particularly Helicon (near Ascra), in Boeotia and Pieria near Mount Olympus), the Muse of Music, Euterpe, stands left, holding an aulos in her right hand and looking up at Apollo (the God of Music - the Muses were directly subordinate to him), floating on a cloud, above right, holding a lyre under his right arm and pointing with his left hand to a distant figure of Pegasus who was regarded as the horse of the Muses. Centre is a winged cupid handing a sheet of music to a young female attendant who holds it with her right hand and in her left, a violin (?), another female attendant stands behind her. Again this is a continuation of the colonnade which begins in the Triumph.