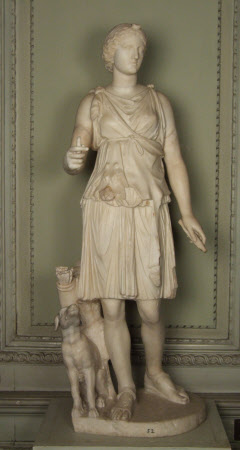 Parian marble, Artemis The marble statue of the goddess Artemis stands upright with the weight on the right leg beside a tree stump which supports her quiver and in front of which sits a dog looking up at her. She wears a short chiton and a panther skin. Artemis was a Greek goddess, probably pre-Olympian in origin, but from Homer onwards said to be the daughter of Zeus and Leto and twin sister of Apollo. She was worshipped with him at Delos, and her most important sanctuaries were at Brauron in Attica and at Ephesus. She was a virgin huntress, associated with uncultivated places and wild animals and often conflated with Hecate, or with Selene, the moon goddess; she was also sometimes a primitive birth goddess and in Sparta merged with the Dorian goddess Orthia. With her arrows she brought natural death and also punished impiety. The Romans identified her with the Italian goddess Diana.

?Collected by Charles, 2nd Earl of Egremont, thence by descent, until the death in 1952 of the 3rd Lord Leconfield, who had given Petworth to the National Trust in 1947, and whose nephew and heir, John Wyndham, 6th Lord Leconfield and 1st Lord Egremont (1920-72), arranged for the acceptance of the major portion of the collections at Petworth in lieu of death duties (the first ever such arrangement) in 1956 by H.M. Treasury.

Wyndham 1915 Margaret Wyndham, Catalogue of the Collection of Greek and Roman Antiquities in the Possession of Lord Leconfield, The Medici Society, 1915, pp.82-83