Pan and Apollo (or Marsyas and Olympos or Pan and Daphnis) 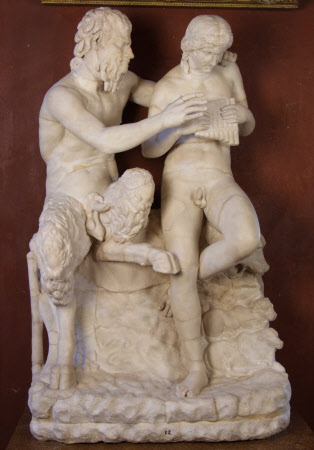 Marble with the head of the boy of transparent Parian marble, Pan and Apollo (or Marsyas and Olympos or Pan and Daphnis). Roman statue of late Greek type, of Pan teaching Olympos (or Daphnis), the blind shepherd boy to play Pan's invention, the syrinx (reed pipes arranged in a row of ascending length), both seated on a rock over which is spread a lion skin. Olympos (Daphnis) restored with an antique head, probably originally of Dionysos. The work was restored by Pietro Pacilli and Vincenzo Pacetti after a version first recorded in the Cesi sculpture garden by Aldovrandi in around 1550 and given to the Ludovisi in the summer of 1622 and by 1633 was recorded in the Bosco delle Statue outside the Palazzo Grande in the family estates on the Pincio but was eventually purchased with the bulk of the collection by the Italian government in 1901 and moved to the Museo Nazionale in Rome.

Sale of the Earl of Bessborough at Roehampton, 6 April 1801; bought by the 3rd Earl of Egremont for £126; descent, until the death in 1952 of the 3rd Lord Leconfield, who had given Petworth to the National Trust in 1947, and whose nephew and heir, John Wyndham, 6th Lord Leconfield and 1st Lord Egremont (1920-72), arranged for the acceptance of the major portion of the collections at Petworth in lieu of death duties (the first ever such arrangement) in 1956 by H.M. Treasury.