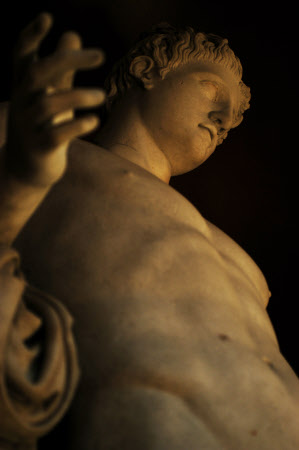 Thasian marble sculpture with crystals, Apollo, Copy of a 4th century BC original of Praxitelean type. A full-lenngth copy of a statue of Apollo depicted standing, resting his right arm on the trunk of a tree on which is placed a drapery. The trunk of the tree, with a branch of laurel and bunch of leaves on one side, is encircled by a serpent. There are four other known replicas of the whole statue and five of the head. Apollo was one of the 'Twelve Olympian' Greek gods, a symbol of light, of youthful manly beauty and of reason. He is also associated with music, archery, medicine, the care of flocks and herds and with prophecy. The island of Delos was sacred to him from earliest times, as it was there that Leto gave birth to him and his sister Artemis. Of the many statues of him in antiquity the most famous originals are perhaps those dating from the mid fifth century from the west pediment of the temple at Olympia, and the Etruscan 'Apollo of Veii' of 510 BC., Praxiteles was an Athenian sculptor of the mid-fourth century BC, much admired and imitated throughout antiquity. Many of his marble statues are known through copies; for example, the Aphrodite of Cnidos, described by Lucian and the elder Pliny, the Aphrodite of Arles and Apollo the Lizard-slayer.

?Collected by Charles, 2nd Earl of Egremont, thence by descent, until the death in 1952 of the 3rd Lord Leconfield, who had given Petworth to the National Trust in 1947, and whose nephew and heir, John Wyndham, 6th Lord Leconfield and 1st Lord Egremont (1920-72), arranged for the acceptance of the major portion of the collections at Petworth in lieu of death duties (the first ever such arrangement) in 1956 by H.M. Treasury.

7 (painted on front of base)