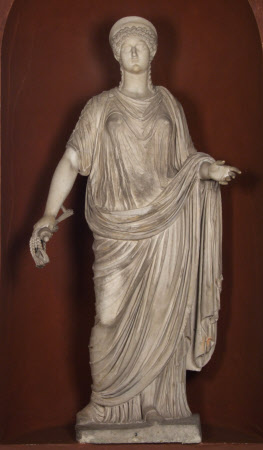 Parian marble sculpture with crystals, Possibly Agrippina the younger (d.59) as Ceres, Roman Julio-Claudian adapatation (after Greek 5th century BC) reworked by Bartolomeo Cavaceppi (Rome 1716 - Rome 1799) whi added nose, arms and attributes of the goddess of the goddess of agriculture. Traditionally called Agrippina the Younger as Ceres and the face indeed resembles Agrippina the younger (AD 15-59) who was the wife of Cnaeus Domitius Ahenobarbus and mother of the Emperor Nero. She was later the wife of her uncle Emperor Claudius whom she was suspected of poisoning after she had ensured Nero's succession in the place of Claudius's own son Britannicus. She was murdered on Nero's orders. Ceres was the ancient Italian corn-goddess, worshipped in historic times in a temple on the Aventine hill with games in her honour and the popular spring festival of the 'Cerialia'. She was earlier associated with Demeter, and her daughter Prosperina is the Roman namefor the Greek Persephone. The marble figure is clothed in a double chiton and the hair is arranged in three rows of crisp curls. .

Collected by Charles, 2nd Earl of Egremont. Then by descent, until the death in 1952 of the 3rd Lord Leconfield, who had given Petworth to the National Trust in 1947, and whose nephew and heir, John Wyndham, 6th Lord Leconfield and 1st Lord Egremont (1920-72), arranged for the acceptance of the major portion of the collections at Petworth in lieu of death duties (the first ever such arrangement) in 1956 by H.M. Treasury.

3 (painted on front of base)