Landscape with a Hunting Party 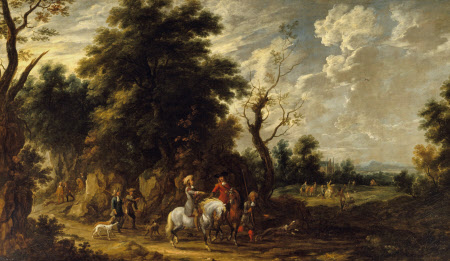 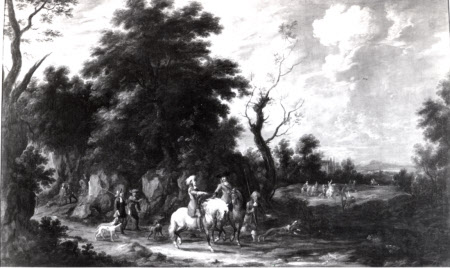 Jacques d’Arthois was a Flemish artist who specialised in landscape painting. He became a master of the Guild of Saint Luke (the confraternity of painters) in 1634. He established his own workshop, and in 1655 he was appointed tapestry designer for the city of Brussels. This picture had always been attributed to Teniers, but it appears almost certainly to be by Arthois. There is no other painting at Petworth today which could have been described as a ‘capital picture’ by Teniers. It seems probable that this picture was that bought by Charles Wyndham, 2nd Earl of Egremont (1710-1763) in 1754. Hunting was a noble pursuit enjoyed by the landed elite, which meant that scenes of this type were popular with collectors.

Oil painting on canvas, Landscape with a Hunting Party by Jacques d'Arthois (Brussels 1613 – Brussels 1686). A hunting party. At left, a road through trees with a rider and two servants carrying a frame with birds; at centre, two horsemen, one in grey on a light grey horse, the other in scarlet. Before them is a footman with a dog and behind them two more with three dogs and a dead hare. At right, mid-distance, is a lady and a man on horseback, with footmen, hawking and a chateau beyond.

Bought by the 2nd Earl of Egremont (1710-1763) at the 24 January 1754 Dr Bragge's sale, Prestagne for £48.6.6.; thence by descent, until the death in 1952 of the 3rd Lord Leconfield, who had given Petworth to the National Trust in 1947, and whose nephew and heir, John Wyndham, 6th Lord Leconfield and 1st Lord Egremont (1920-72) arranged for the acceptance of the major portion of the collections at Petworth in lieu of death duties (the first ever such arrangement) in 1956 by HM Treasury.