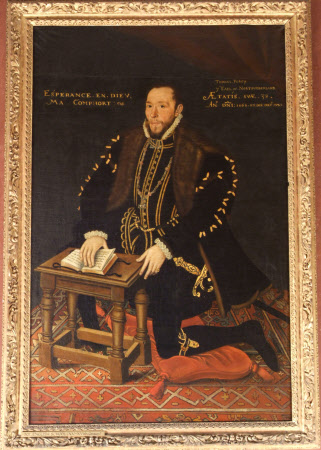 Oil painting on canvas, Thomas Percy, 7th Earl of Northumberland KG (1528-1572), aged 38, British (English) School, inscribed front top left: ESPERANCE.EN.DIEV,/MA COMPHORT and inscribed top right: THOMAS. PERCY /7TH EARL. of. NORTHVMBERLAND./ÆTATIS. SVÆ. .38 / ANO DNI: 1566.ET.DiE DECO.IVNI. A full-length portrait, kneeling on a red cushion on a Turkey rug, three-quarters left, at a faldstool on which there is an open psalter. He is wearing a black gold-edged doublet and small lace pleated ruff and cuffs, with the garter below the left knee and the Garter badge on a chain, also a black surcoat edged with fur with the sleeves seamed with gold tabs. His gold sword hilt has a phoenix on the knop and on the guard a naked male figure. It was not until 1557 that the 7th Earl succeeded to the title, due to his father Thomas's attainder. Although his Catholicism debarred him from office under Elizabeth I, in 1563 he entertained the Queen at Petworth, where he was encouraged to live because of suspicions about his loyalty. Indeed he viewed Mary, Queen of Scots as Elizsbeth's rightful heir and formented rebellion inthe North following her imprisonment. In 1569 Northumberland and the other rebels fled to Scotland, where they were imprisoned. Three years later, he was handed over to the English government, was beheaded at York in 1572, and was beatified soon afterwards.

In the collection of the 2nd Earl of Egremont (1710-1763) by 1763; thence by descent, until the death in 1952 of the 3rd Lord Leconfield, who had given Petworth to the National Trust in 1947, and whose nephew and heir, John Wyndham, 6th Lord Leconfield and 1st Lord Egremont (1920-72) arranged for the acceptance of the major portion of the collections at Petworth in lieu of death duties (the first ever such arrangement) in 1956 by H.M.Treasury.