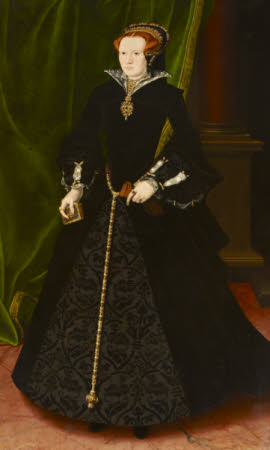 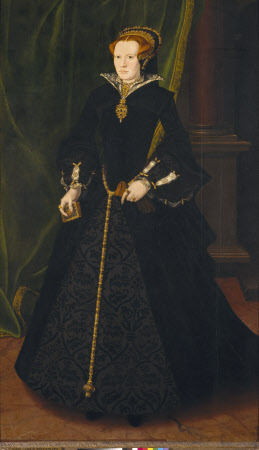 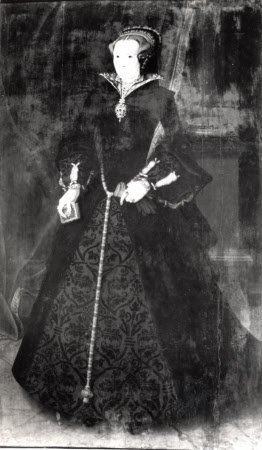 Lady Mary Dudley was the elder daughter of John Dudley, Earl of Warwick and Duke of Northumberland (1502?–1553), and sister of Elizabeth I’s favourite, Robert Dudley, Earl of Leicester (1532?–1588). She was the mother of Sir Philip Sidney and of Robert Sidney, 1st Earl of Leicester of the fourth creation. The painting was probably acquired from Penshurst Place in the eighteenth century. Eworth was a Flemish painter who emigrated to London in 1544. The care with which the jewellery and book-binding are depicted is typical of him. However, he rarely painted whole-lengths, and the loose curtain background is not characteristic of his work.

Oil painting on panel, Mary Dudley, Lady Sidney (c.1530-1586) by circle of Hans Eworth (Antwerp c.1525 – ?London after 1578), purportedly formerly bearing the signature: HE; but – if it ever existed – it is no longer visible, circa 1550/60. A full-length portrait, turned slightly to the left, standing, nearly full face with light auburn hair. She is wearing a black coif with pearls and gold piping, a black dress, white revers, embroidered with black and has a black and white cord around her waist reaching to the hem of her skirt; the cuffs are puffed with white silk and she wears a pearl necklace with large gold pendants. In her right hand she is holding a book, and in her left gloves. The background is of a green curtain.

Recorded at Penshurst in around 1737. Sold as part of the estate of Lady Sidney Sherard (d.1758), at Langford's Covent Garden, 10 May 1764, lot 3. Recorded at Petworth in 1775. Thence by descent, until the death in 1952 of the 3rd Lord Leconfield, who had given Petworth to the National Trust in 1947, and whose nephew and heir, John Wyndham, 6th Lord Leconfield and 1st Lord Egremont (1920-72) arranged for the acceptance of the major portion of the collections at Petworth in lieu of death duties (the first ever such arrangement) in 1956 by H.M.Treasury.