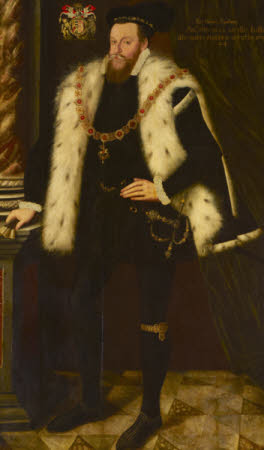 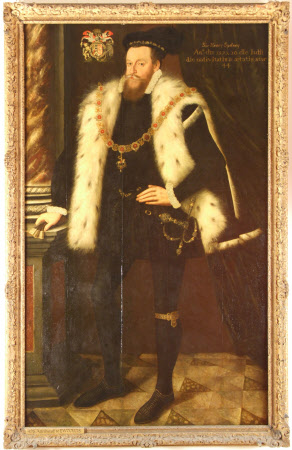 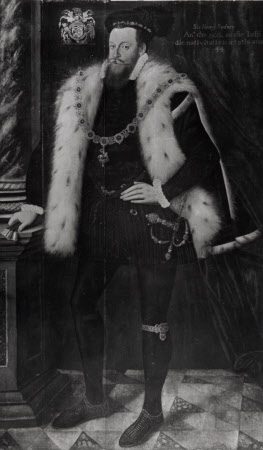 Oil painting on panel, Sir Henry Sidney KG (1529-1586), aged 44 by Arnold van Bronckhorst (c.1566 - 1586), inscribed, top right: Ano dom 1573 20 die Iulii die nativitatis aetatis suae 44. A full-length portrait, standing, three-quarters left with his right hand on the plinth of a marble column holding a glove, the left on his hip above an elaborate silver hilt. He is wearing a black doublet and hose, with the Garter on his left knee, a black cape trimmed and lined with ermine, a black cap with silver band, the Garter chain and badge and black and gold shoes. In the top left corner can be seen a coat-of-arms and on the right hand side is a green curtain, with a red and white marble column at left with red entablatures.

Recorded at Penshurst in 1737; sold as part of the estate of Lady Mary Sidney Sherard (d.1758), Langford's Covent Garden, 10 May 1764, lot 3; recorded at Petworth in 1798 and thence by descent, until the death in 1952 of the 3rd Lord Leconfield, who had given Petworth to the National Trust in 1947, and whose nephew and heir, John Wyndham, 6th Lord Leconfield and 1st Lord Egremont (1920-72) arranged for the acceptance of the major portion of the collections at Petworth in lieu of death duties (the first ever such arrangement) in 1956 by H.M.Treasury.