A Vision of the Last Judgment 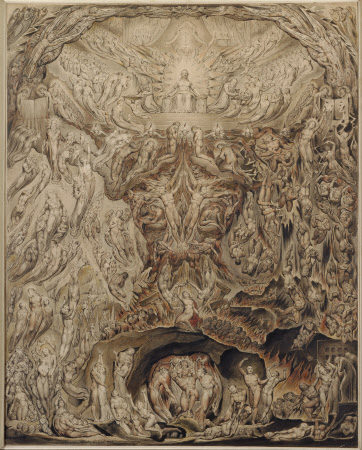 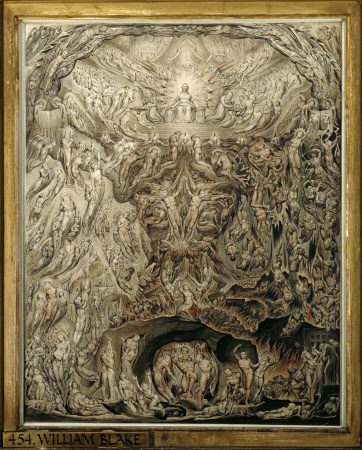 Pencil, pen and watercolour on paper

William Blake (1757–1827) was a visionary artist and poet whose work was not well known in his own lifetime. He worked principally in watercolour, creating powerful and often complex compositions that provided new visual interpretations of Christian subjects, classical myths and literary stories. This dramatic scene depicts the Last Judgement, when the ‘just and the dammed’ are judged before Christ and rise to heaven or fall to hell. Blake provided a detailed explanation of the densely packed action, describing the ascending figures, on the left, as the righteous who ‘rise thro[ugh] the air with their children & Families’, and those on the right as the wicked or the ‘dammed’, who appear ‘chained & bound together fall[ing] thro[ugh] the air … some are scourged by spirits with flames of fire into the Abyss of Hell’. This image was commissioned in 1808 by Elizabeth Ilive, Countess of Egremont (c.1769–1822). She had married George O’Brien Wyndham, 3rd Earl of Egremont (1751–1837), in 1801, having already had several children by him out of wedlock, but the couple separated in 1803, apparently as a result of the earl’s infidelity. The subject of this painting may have been considered particularly appropriate, allowing Elizabeth to focus upon religious devotion rather than her past sorrow.

Watercolour, pen and ink and pencil on paper, A Vision of the Last Judgment, by William Blake (1757-1827), inscribed: W. Blake (WB in monogram) inv. and del. 1808. Christ is depicted enthroned among the Blessed at the top. In the centre, the Angels of the Judgment Day sound trumpets. At left, the Blessed can be seen rising in a stream towards the throne and at right, the damned drop into Hell where Appolyon is seated, six-headed and bound. Previously mounted on a canvas and stretcher, in 1957 it was remounted on cardboard.

Petworth is unique as the only major country house in Britain to hold original works by William Blake. These include tempera and watercolour paintings, prints, manuscripts and illustrated books. Collectively they offer valuable insights into various cultural and personal relationships that developed at Petworth in the early nineteenth century and are especially interesting given the general paucity of purchases from the artist among the aristocratic elite. After Satan Calling up his Legions (NT 486264), A Vision of the Last Judgement was the second painting commissioned from the artist by Elizabeth Ilive (1769-1822), Countess of Egremont and wife of the third Earl (1751-1837). As a teenager Ilive became one of George Wyndham’s numerous liaisons; she lived at Petworth from 1786 and bore him nine children, six of whom survived. The couple finally married in 1801, only to separate two years later because of her husband’s continued infidelity. At Petworth Illive developed interests in science and fine art, establishing both a laboratory and museum in the house and is known to have painted. After the separation she took up residence in London and never returned to live at Petworth. The relationship between Blake and the Egremonts almost certainly originated from a mutual friendship with the writer William Hayley (1745-1820), Blake having relocated to Sussex in 1800 to take up a job as illustrator to Hayley’s Life of Cowper. Ilive made a strong impression on the artist, whom he variously referred to as ‘a mighty Soul in Beautys form’ and a ‘fortunate star’ (British Library Add MS 49460 and Petworth House Archive no. 87). The image takes as its central message the glorification of family life and depicts mothers and fathers with infants ascending to heaven (left), in contrast to the wicked who descend into hell (right). Their sin is suggested by the kneeling figures of Adam and Eve and the Harlot of Babylon who sits above the Beast’s cave (Revelation 17). The prominent female figure on the left surrounded by stars and children has been interpreted as Elizabeth Illive herself, the uterine shape of the central register a reference to her bearing of children. A seated male figure, adjacent to the female figure and sketching her, is often read as Blake. Uniquely in Blake’s art, the iconography of A Vision of the Last Judgment is fully explained by the artist in a descriptive note written on 18 January 1808 to the painter Ozias Humphry, who appears to have acted as the intermediary in the transaction with Ilive. The note survives in three autograph versions, one of which is in the Petworth House Archive (no. 87). The first version of this picture (Glasgow Museums, Pollock House) was done for Blake's principal patron, the London-based civil servant Thomas Butts (1757–1845), as was a subsequent related work, 'The Fall of Man' (Victoria & Albert Museum, London, P.29-1953). The present work was one of very few works by Blake to be shown at the Royal Academy, where he exhibited only twelve pictures in his lifetime and never again after A Vision of The Last Judgment. The work, which went unnoticed by the reviewers, echoes in part the version of the subject in the Sistine Chapel by Blake’s hero Michelangelo.

Commissioned by the Countess of Egremont in 1807 on the recommendation of Ozias Humphry, RA (see Blake's letter, 18 February 1808); thence by descent, until the death in 1952 of the 3rd Lord Leconfield, who had given Petworth to the National Trust in 1947, and whose nephew and heir, John Wyndham, 6th Lord Leconfield and 1st Lord Egremont (1920-1972) arranged for the acceptance of the major portion of the collections at Petworth in lieu of death duties (the first ever such arrangement) in 1956 by HM Treasury