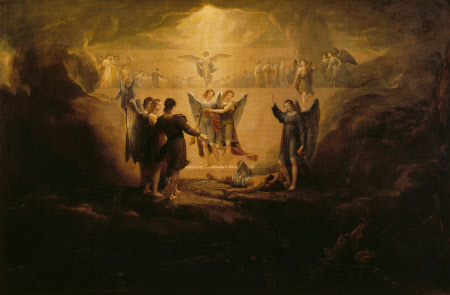 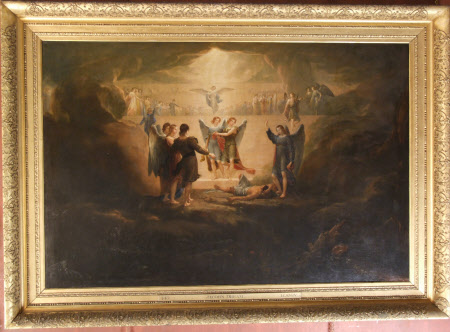 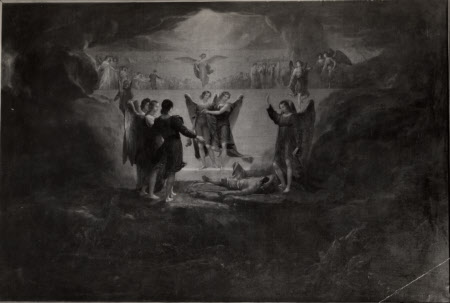 Allston was an American painter and poet who pioneered America’s Romantic movement of landscape painting. He was well known during his lifetime for his experiments with dramatic subject matter and his bold use of light and atmospheric colour. He began this picture in 1817 and it was bought by the 3rd Earl of Egremont at the Royal Academy exhibition in 1819 where it inspired Wordsworth’s lines: ‘But rooted here, I stand and gaze / On those bright steps that heavenward raise / Their practicable ways.’

Oil painting on canvas, Jacob's Dream by Washington Allston (Georgetown 1779 - Cambridgeport 1843), begun in 1817 and inscribed on reverse: neat black script (in the hand of Thomas Phillips?): Wton Allston. 1818. A scene, from the biblical book of Genesis, 28:12-15, depicting Jacob asleep in the centre with three angels standing at left, one at right, two beyond him and one flying in the centre; the horizon is lined with angels. The greatest commentator on the picture was William Wordsworth, some of whose lines in his poem 'Composed upon an Evening of Extraordinary Splendour and Beauty' of 1817 were inspired by Allston’s picture: "And if there be whom broken ties Afflict or injuries assail, Yon hazy ridges to their eyes Present a glorious scale, Climbing suffused with sunny air, To stop – no record hath told where! And tempting Fancy to ascend, And with immortal spirits blend! – Wings at my shoulders seem to play: But, rooted here, I stand and gaze On those bright steps that heavenward raise Their practical way." The artist was the first important American landscape painter. He was trained in London (1801-03) in the RA Schools and under Benjamin West, and travelled widely in Europe before returning to America. He made a second visit to Europe in 1810 and was elected ARA in 1818, the year in which he returned to America. His intensely Romantic outlook led to his admiring Fuseli and Turner. He painted portraits in Boston and Philadelphia, and most of his works are in America, especially in Boston. He died in Cambridge, USA. in 1843. Allston's connection with the 3rd Earl of Egremont (1751-1837) seems to have actively begun in about 1817 when he began to paint his large 'Jacob's Dream' which the 3rd Earl had wanted for his house in London. The picture proved too large and it was installed instead at Petworth. Allston became one of the numerous artists to enjoy Egremont's famed hospitality at Petworth, his last visit probably that of 1 August 1818 before returning to the United States.

Bought by the 3rd Earl of Egremont (1751-1837) at the Royal Academy exhibition, 1819 (309); thence by descent, until the death in 1952 of Charles Henry Wyndham, 3rd Lord Leconfield, who had given Petworth to the National Trust in 1947, and whose nephew and heir, John Wyndham, 6th Lord Leconfield and 1st Lord Egremont (1920-72) arranged for the acceptance of the major portion of the collections at Petworth in lieu of death duties (the first ever such arrangement) in 1956 by HM Treasury and subsequently transferred to the National Trust

Verso: Printed and typed label of exhibition at Walker Art Gallery, Liverpool, American Artists in Europe 1800–1900, No.5 (owner given as the National Trust, Petworth) [no numbers]