The Characters from Spenser's 'Faerie Queene' 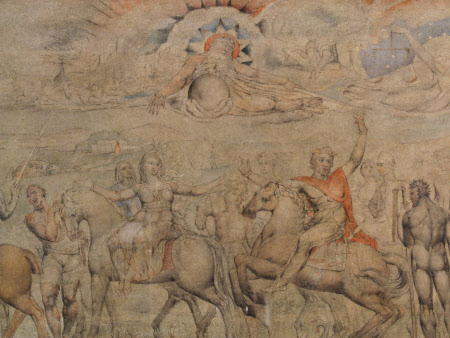 Painted in c.1825, it was bought by the 3rd Earl of Egremont from the artist’s widow, Catherine Boucher, who in 1829 instructed him as to its care, writing ‘Mr Blake had a great dislike to his pictures falling into the hands of the picture cleaners.’

Watercolour and ink on muslin attached to paper and laid down on to canvas, The Characters from Spenser's 'Faerie Queene' by William Blake (London 1757 - London 1827), signed: W.B. On the left-hand side is a procession with at left, the Red Cross Knight on a horse and Una on an ass; next, an old man, with a child on foot; then the Knight riding; Charissa riding; next, a King, and a standing man with a flail; and lastly a muzzled monster and a standing man. In the sky the sun is in the centre with, at left, the moon and at right, Justice among the stars. On the left-hand side is a spired Gothic Cathedral in the sky and on the right-hand side, a structure suggesting the Tower of Babel.

This painting was bought by the 3rd Earl of Egremont from the artist’s widow, Catherine Blake, who subsequently wrote two letters in connection with it (see Petworth House Archive, no. 5747). It shares both similar dimensions and the compositional format of an earlier work, 'Chaucer and the Pilgrims on their Journey to Canterbury' from about 1808 (Glasgow Museums), which Blake engraved and first published in 1810 before revisiting the plate on three occasions, with impressions running into the 1820s (Lord Egremon, Private Collection). 'The Canterbury Pilgrims' would, therefore, have been fresh in Blake’s mind when he painted 'The Characters in Spenser’s "Faerie Queen"’; however, the former was bought by Thomas Butts and there is no evidence of the paintings having been shown together in Blake’s lifetime, even though they would form an ideal pendant pair with the two processional arrangements hung to face each other. Interestingly, when Henry Wyndham Phillips carried out his inventory of the pictures at Petworth in 1835 he listed 'The Characters in Spenser’s "Faerie Queene"’ as 'The Canterbury Pilgrims'. The poem, published in parts from 1590, remains one of the longest in the English language and was highly regarded by Elizabeth I, who rewarded Spenser with a life-long pension. The library at Petworth contains a first edition, which in Egremont's eyes may have given Blake’s painting added interest. Gloriana, the Faerie Queen, appears in neither the poem nor the painting but presides over a court served by the major characters, who often praise her, and she can be read as an idealised portrait of Queen Elizabeth. Blake perhaps also alludes to this in his portrait of Spenser for William Hayley (Manchester City Galleries). The six books of the 'Faerie Queene' are each concerned with a separate human virtue embodied by a lead character, all shown by Blake as mounted on horseback and imaginatively conflated into a single procession heading symbolically from Babylon to the New Jerusalem. They are led by Una and the Redcrosse Knight from Book I, ‘Holinesse’; followed by Guyon (Book II, ‘Temperance’); Britomart (Books III and IV, ‘Chastity’); Sir Arthegal and Prince Arthur (Book V, ‘Justice’); and finally Sir Calidore (Book VI, ‘Courtesy’). Text adapted from William Blake in Sussex: Visions of Albion, ed. Andrew Loukes, National Trust in association with Paul Holberton Publishing, 2018, p. 104.

Lord Egremont, to whom Blake was introduced while living at Felpham (1800-1803) purchased this design from Mrs Blake shortly after the painter's death in 1827 for 80 guineas; thence by descent, until the death in 1952 of the 3rd Lord Leconfield, who had given Petworth to the National Trust in 1947, and whose nephew and heir, John Wyndham, 6th Lord Leconfield and 1st Lord Egremont (1920-72) arranged for the acceptance of the major portion of the collections at Petworth in lieu of death duties (the first ever such arrangement) in 1956 by H.M.Treasury.