The Cognoscenti: including Captain Walcot, Mr Apthorp and Thomas Patch (1725-1782) 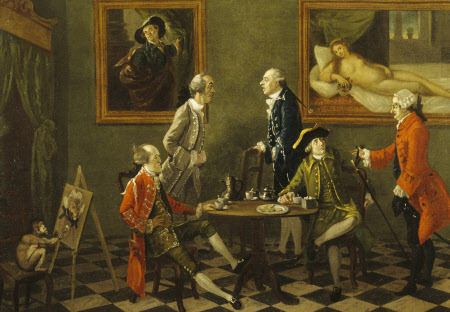 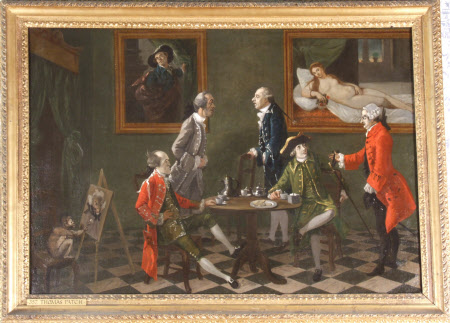 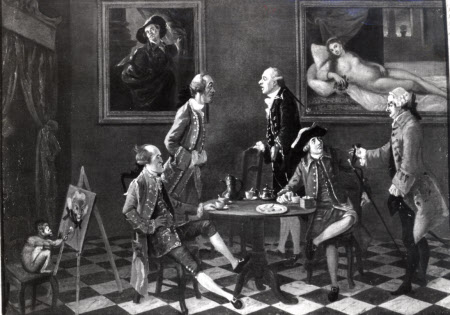 This picture was thought, at one time, to be an ‘unusually careless’ (Waagen 1857) work by Hogarth. It was not attributed to Patch until 1940. It is possible that the seated figure to the right is Charles Wyndham, 2nd Earl of Egremont (1710–1763). He went on the Grand Tour from 1728 to 1730 with George Lyttelton (1709-1773) and Henry Bathurst (1714-1794). Two figures: Captain Walcot (seated to the left) and Mr Apthorp (standing to the right) have been identified from the artist's caricatures series. The portrait of the cavalier hanging on the wall bears the features of the artist; the copy of Titian’s ‘Venus of Urbino’ was originally partly concealed by a green curtain, which was removed when the picture was cleaned in 1954. That a monkey is painting a portrait, which itself has simian features, is a sly comment on the taste and behaviour of the sitters but also refers to the ape as the symbol of the art of painting and sculpture. The artist's skill was regarded as essentially imitative and became linked with the animal that was known for its imitativeness, expressed in a popular sayng, 'Art simia Naturae' - 'Art is the ape of nature'.

Oil painting on canvas, The Cognoscenti: including Captain Walcot, Mr Apthorp and Thomas Patch (1725 -1782), late 1764/65. Five full-length figures around a central tea table, two are seated to left and right (possibly Charles Wyndham, 2nd Earl of Egremont) of the table, two stand conversing behind the table (possibly Sir Horace Mann (1706-1786), British envoy in Florence from 1740; standing right) and a figure on the right is conversing with the seated figures at the table. Portraits of Captain Walcot (seated left), Mr Apthorp (standing far right; in black, includiong stockings, possibly as he was just a widowed) [John Apthorp (1730 - 1772) married Alicia (as his first wife), the niece of Horace Mann, in 1758 but she died on the way to Italy in 1763 leaving two orphaned daughters - all three were painted together by Angelica Kauffman, Spring 1764] Both men have been identified from Patch's 28 Caricatures series (1769-70). The artist himself is identified as in the portrait painting on the wall, to the left. Far left is a monkey, seated before an easel, painting a self-portrait, on the walls hangs a portrait, on left, of Patch, who settled in Florence in 1755, dressed as a cavalier and on the right, a copy, without the maidservant figures in the background of the original, of Titian’s Venus of Urbino (Uffizi, Florence). The floor has a diamond pattern.

Recorded at Petworth in 1798; thence by descent, until the death in 1952 of the 3rd Lord Leconfield, who had given Petworth to the National Trust in 1947, and whose nephew and heir, John Wyndham, 6th Lord Leconfield and 1st Lord Egremont (1920-72) arranged for the acceptance of the major portion of the collections at Petworth in lieu of death duties (the first ever such arrangement) in 1956 by HMTreasury.