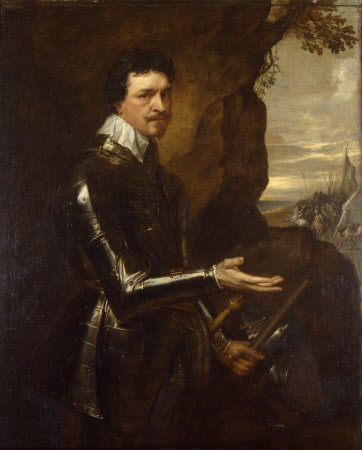 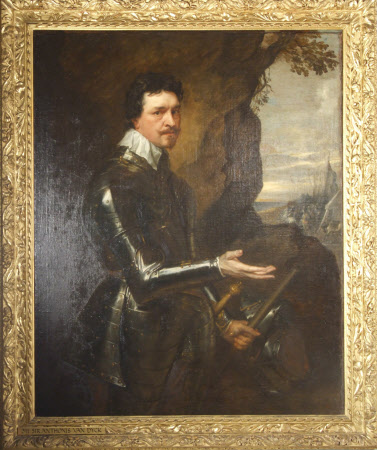 Thomas Wentworth was Charles I’s great minister, abandoned by the King to execution by Parliament. This freely painted and well-preserved version of Van Dyck's full-length was given by Strafford in 1636 to Lady Lucy Percy, Countess of Carlisle, sister of the 10th Earl of Northumberland. Strafford paid £20, £10 less than Van Dyck’s usual price for this size of picture. Lady Carlisle was deeply attached to Strafford, and she exchanged a whole-length of herself for this ¾-length of him. The relationship appears to have been an intellectual one, but it attracted scandalous gossip at the time. The source for this portrait was Titian’s ‘Marquis del Vasto addressing his Troops’, then owned by Charles I. The full-length was also based on a portrait by Titian (‘Charles V with his Dog’), likewise at that time owned by the king.

Oil painting on canvas, Thomas Wentworth, 1st Earl of Strafford (1593 – 1641) by Sir Anthony Van Dyck (Antwerp 1599 - London 1641). A three-quarter-length portrait, standing, bareheaded, three-quarters right, and in armour. His right arm is half-extended and there is a baton in his left hand. A squadron of cavalry with banners is in the right background. His helmet is on a ledge at right.

Given by the 1st Earl of Strafford (1593-1641) in 1636 to Lady Lucy Percy, Countess of Carlisle (1599-1660), sister of the 10th Earl of Northumberland. Probably bequeathed by her to the 10th Earl as recorded at Northumberland House on 30 June 1671 and at Petworth in c.1730. Thence by descent, until the death in 1952 of the 3rd Lord Leconfield, who had given Petworth to the National Trust in 1947, and whose nephew and heir, John Wyndham, 6th Lord Leconfield and 1st Lord Egremont (1920-72) arranged for the acceptance of the major portion of the collections at Petworth in lieu of death duties (the first ever such arrangement) in 1956 by H.M.Treasury.

cleaned by Ed. Holder at Petworth 1835 (printed on the back)