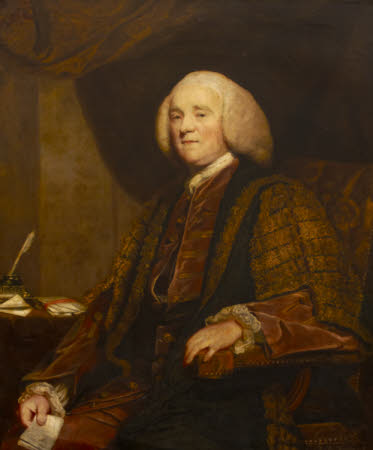 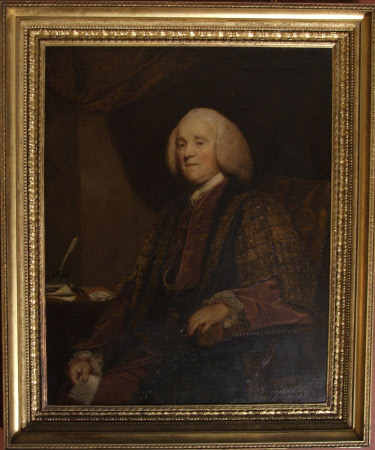 Oil painting on canvas, The Right Hon. George Grenville MP (1712-1770) by Sir Joshua Reynolds (Plympton 1723 - London 1792), circa 1767. A three-quarter-length portrait, seated, turned three-quarters to the left, and wearing his Chancellor's robes, a dull rose coat and breeches. His left arm is along a chair-arm, whilst his right hand is holding some paper on his knee. On the left-hand side are an inkstand, quill and papers, against a background of a gold-brown curtain.

Reynolds’s pocket-books record appointments with Grenville on 27 July, 17 September, 22 September, 2 October and 8 October, 1764, cancelled appointments on 20 and 27 October 1764, and a single further appointment on 14 May 1766. These were for the original of this (private coll., UK) and for the whole-length (Columbia University, New York), both of which may employ the same face-mask. This version was painted for Percy Wyndham O’Brien, Earl of Thomond (paid for, 1767, by ‘Ld Tumont’ 50 gns.), whose sister Elizabeth had married George Grenville (1712–1770). It is recorded in the inventory of the contents of Lord Thomond’s house in Dover Street after his death, in 1774, as: “A ½ length of George Grenville Esq”, and will have been left to his nephew, George O’Brien (Wyndham), 3rd Earl of Egremont (1751–1837); presumably painted for Percy Wyndham O'Brien, Earl of Thomond (paid for 1767 by 'Ld Tumont' 50 gns); left by Lord Thomond to his nephew, George O'Brien Wyndham, 3rd Earl of Egremont (1751-1837). Thence by descent, until the death in 1952 of the 3rd Lord Leconfield, who had given Petworth to the National Trust in 1947, and whose nephew and heir, John Wyndham, 6th Lord Leconfield and 1st Lord Egremont (1920-72) arranged for the acceptance of the major portion of the collections at Petworth in lieu of death duties (the first ever such arrangement) in 1956 by H.M.Treasury.

Rt.Honble. George Grenville, 1st Lord of Treasury and Chancellor of Exchiquor (printed on the back and inscription reproduced exactly from Collins Baker)