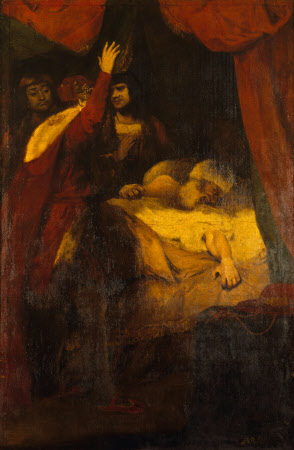 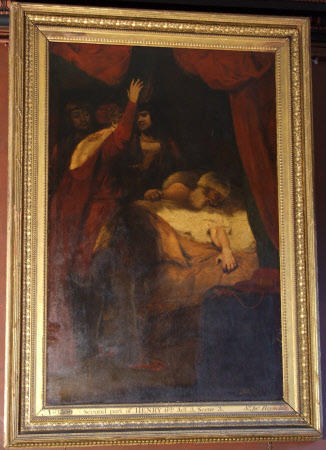 The scene is taken from the second part of Henry VI, Act III, Scene iii. The death throes of Cardinal Beaufort, who was the Bishop of Winchester and the king’s great uncle, are witnessed by the Henry VI, Warwick and Salisbury. King Henry laments: “Look with a gentle eye upon this wretch; O! beat away the busy medling fiend That lays strong siege unto this wretch’s soul And from his bosom purge this black despair.” For the figure of the Cardinal, Reynolds used ‘a porter or coalheaver’ as a model, and for King Henry, he used an Italian colour-grinder by the name of Grandi. Northcote commented on the paradox whereby Reynolds could transform sitters for portraits, even if they were beggars, into heroes; whereas he would often make his heroes in his subject paintings look like beggars.

Commissioned for Boydell's Shakespeare Gallery for 500 gns in 1789. Bought in 1805 at Christies Shakespeare Gallery sale by the 3rd Earl of Egremont for £530.5s. Thence by descent, until the death in 1952 of the 3rd Lord Leconfield, who had given Petworth to the National Trust in 1947, and whose nephew and heir, John Wyndham, 6th Lord Leconfield and 1st Lord Egremont (1920-72) arranged for the acceptance of the major portion of the collections at Petworth in lieu of death duties (the first ever such arrangement) in 1956 by H.M.Treasury.