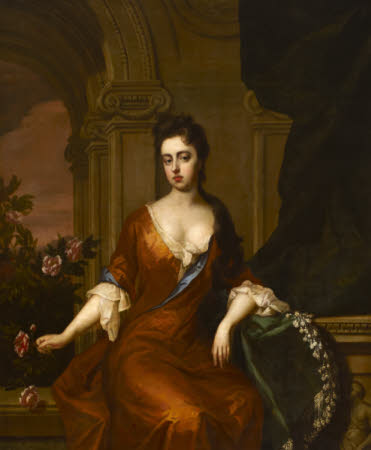 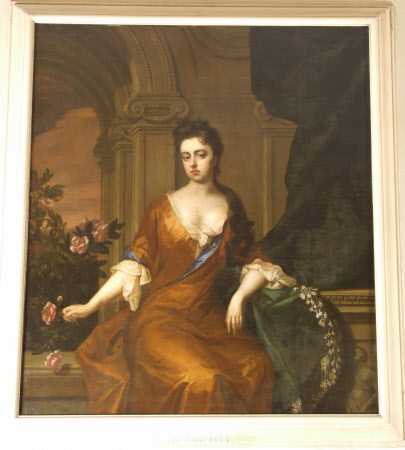 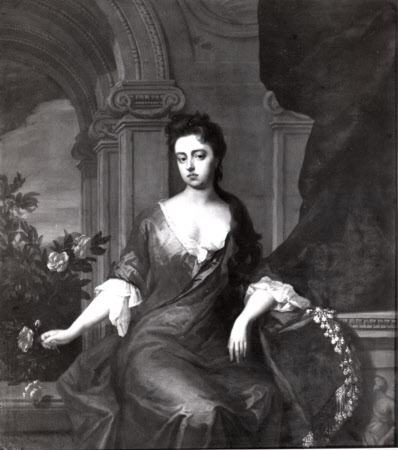 This is one of a series of seven portraits by Michael Dahl known as the ‘Petworth Beauties’ painted for Charles Seymour, 6th Duke of Somerset (1662-1748) in the late 1690s. These pictures may have been painted in conscious rivalry with Sir Godfrey Kneller’s ‘Hampton Court Beauties’. Dahl was first employed by the Duke in 1696, and superseded Closterman in what amounted to the position of official court painter to the Duke. The quality of the pictures was remarked upon by George Vertue in his ‘Notebooks.’ Lady Mary Somerset, was the daughter of Henry Somerset, 1st Duke of Beaufort (1629-1700) and Mary, eldest daughter of Arthur Capel. In 1685 she married as his second wife, James Butler, 2nd Duke of Ormonde (1665-1745). They had a son who died in infancy and five daughters.

Oil painting on canvas, Lady Mary Somerset, Duchess of Ormonde (1665-1733) by Michael Dahl (Stockholm 1656/9 – London 1743), 1690s. Three-quarter-length portrait, of a young woman, seated, full front, her head three-quarters left. She is wearing a deep brown-gold dress, blue lined and is holding a rose in her right hand. A bottle green curtain is to the right and an arcade in the left background.

Painted for the 6th Duke of Somerset (1662-1748) in the late 1690s. Thence by descent, until the death in 1952 of the 3rd Lord Leconfield, who had given Petworth to the National Trust in 1947, and whose nephew and heir, John Wyndham, 6th Lord Leconfield and 1st Lord Egremont (1920-72) arranged for the acceptance of the major portion of the collections at Petworth in lieu of death duties (the first ever such arrangement) in 1956 by H.M.Treasury.