The Three Younger Children of Charles I 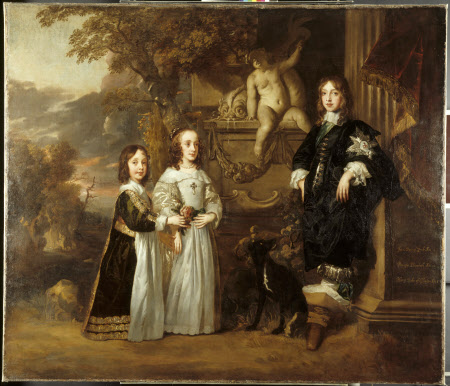 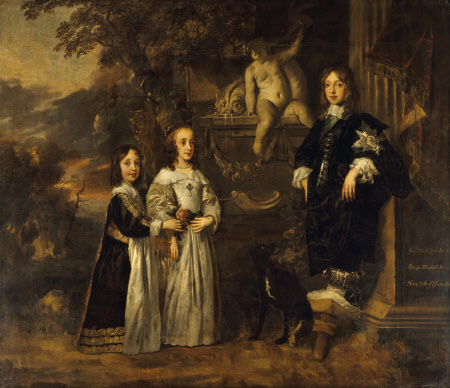 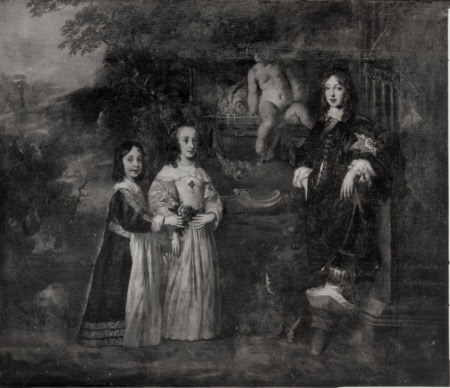 After the fall of Oxford in April 1646, the younger children of the King were put under the care of Algernon Percy, 10th Earl of Northumberland (1602-1668). In the late summer of 1646 he took the children to Syon House. The 10th Earl was Lely’s first important patron, and in 1647 he commissioned the present painting. This picture is clearly influenced by Van Dyck’s ‘Three Children of Charles I’, which later belonged to Lely. Both pictures are the forerunners of the type of portrait in a landscape that was to dominate English portraiture until the end of the 18th century. It is curious that Prince Henry, shown on the left, is still shown in skirts at the age of eight (he also looks younger): boys were normally breeched by or at the age of 7 at the latest.

Oil painting on canvas, The Three Younger Children of Charles I (James Duke of York, later James II, aged 14 (1633-1701); Princess Elizabeth, aged 12 (1635-1650); and Henry, Duke of Gloucester, aged 8 [1639-1660]) by Sir Peter Lely (Soest 1618 – London 1680), inscribed with titles and ages of the sitters, mid-right on pillar: James Duke of Yorke Æta 14 / Princesse Elizabeth Æta 12 / Henry Duke of Gloster Æta 8, 1647. Three full-length portraits of James Duke of York, later James II, aged 14 (1633-1701), Princess Elizabeth, aged 12 (1635-1650) and Henry, Duke of Gloucester, aged 8 (1639-1660), left to right, Henry, turned slightly to right, facing, handing a rose to Elizabeth,who is turned slightly to right, facing three-quarter right, and James on right, turned partly to the left, facing. A large Baroque fountain with a cherub sitting beside a dolphin spouting water into a basin below dominates the background of the garden landscape. Henry Duke of Gloucester, born at Oatlands Palace, Surrey 8 July 1640, styled Duke of Gloucester from birth, created Duke of Gloucester and Earl of Cambridge in 1659. was the third and youngest son of King Charles I and Henrietta Maria. In the custody of the Duke of Northumberland at Syon House (see the Lely of him at Petworth) until the escape of his brother, James, Duke of York; then transferred to that of the Countess of Leicester at Penshurst; from 1650 held at Carisbrooke Castle, until the end of 1652, when permitted to go abroad. He joined his mother in Paris, until 1654, when her attempts to persuade him to become a Catholic prompted Charles II to send for Henry to be with him, first at Cologne, and from 1656 at Bruges. He entered the English regiment of foot in the Spanish army in the Netherlands (hence his armour), and acquitted himself bravely alongside his brother James at the Battle of Dunkirk (1658). He accompanied Charles back to England at the Restoration in 1660, but died in September of smallpox. Bishop Burnet (1833) wrote: "He was active, and loved business ... and had an insinuating temper", and that Charles II "was never in his whole life seen so much troubled" as at his death.

Commissioned in 1647 by the 10th Earl of Northumberland (1602-1668), in whose custody the children were placed after the fall of Oxford and was painted at Syon. Kept by Charles I whilst under arrest at Hampton Court and sent from Hampton Court after the King's execution on 30 January 1649 by the Keeper of the Privy Lodgings, possibly presented to the 10th Earl - it was seen at Northumberland House by Richard Symonds on 27 December 1652; thence by descent, until the death in 1952 of the 3rd Lord Leconfield, who had given Petworth to the National Trust in 1947, and whose nephew and heir, John Wyndham, 6th Lord Leconfield and 1st Lord Egremont (1920-72) arranged for the acceptance of the major portion of the collections at Petworth in lieu of death duties (the first ever such arrangement) in 1956 by HM Treasury