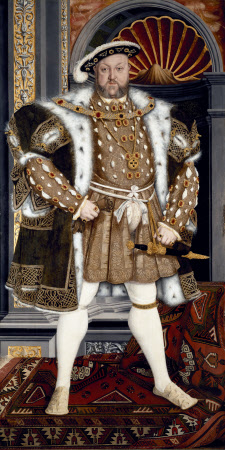 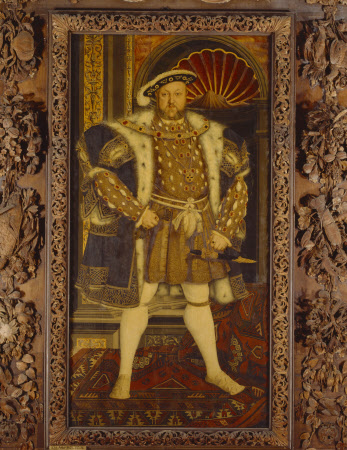 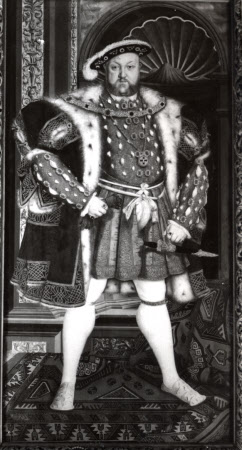 This is a superbly executed, but not an autograph, repetition of the figure of the King from The Whitehall Mural by Hans Holbein the Younger, from the fresco of 1537. This was on the wall of the Privy Chamber (originally Henry VIII’s Privy Chamber) at Whitehall, before it was destroyed by fire in 1698. Its fidelity to the lost original includes the rucked-up carpet on the right, which it alone of the copies and derivatives includes. It is a strong indication that the picture was painted in Holbein’s studio.

Oil painting on oak panel, Henry VIII (1491-1547), studio of Hans Holbein the younger (Augsburg 1497/8 - London 1543), circa 1543-7. Inscribed on the front: bottom left, in gold paint: Henry 8; and, bottom right, in gold paint: 135. A full-length portrait of Henry VIII, facing, standing with feet apart, elbows squared, and wearing a dark green surcoat with ermine collar, bejewelled cloth of gold tunic, white hose and pale biscuit coloured shoes, and a flat black cap with white plume. He holds in the right hand a pair of gloves and the chain of a dagger in the left. Against an architectural background with grey pilasters inlaid with yellow and grisaille arabesque panels, and a shell niche painted red and gold. The king stands on a Turkey carpet, bunched over the step at right. Another version of this picture in the Walker Art Gallery, Liverpool, was once owned by Henry Danby Seymour (1820–1877) of East Knoyle, a descendant of Edward Seymour, Duke of Somerset, the Protector (?1506–1552), who was brother of Henry VIII’s third wife, Jane Seymour, and uncle of their son, Edward VI, as was Charles, 6th Duke of Somerset (1662–1748) who once owned this picture. The fragment from the cartoon for The Whitehall Mural by Hans Holbein the Younger, mounted on canvas was transferred from Chatsworth, having hung previously at Hardwick Hall (NT), to the National Portrait Gallery in 1957.

Almost certainly commisioned by Edward Seymour, 1st Duke of Somerset (elder brother of Queen Jane and guardian of Edward VI); in the collection of Charles Seymour, 6th Duke of Somerset (1662-1748); first recorded at Petworth by George Vertue in 1721; thence by descent, until the death in 1952 of the 3rd Lord Leconfield, who had given Petworth to the National Trust in 1947, and whose nephew and heir, John Wyndham, 6th Lord Leconfield and 1st Lord Egremont (1920-72) arranged for the acceptance of the major portion of the collections at Petworth in lieu of death duties (the first ever such arrangement) in 1956 by HM Treasury.