John Knox preaching before the Lords of the Congregation, 10th June, 1559 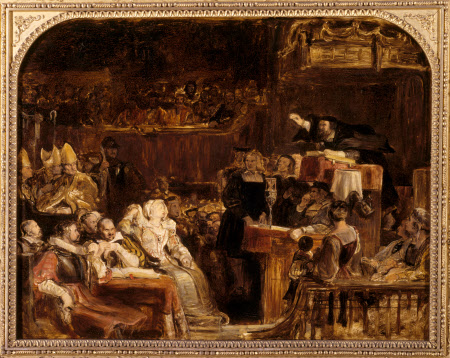 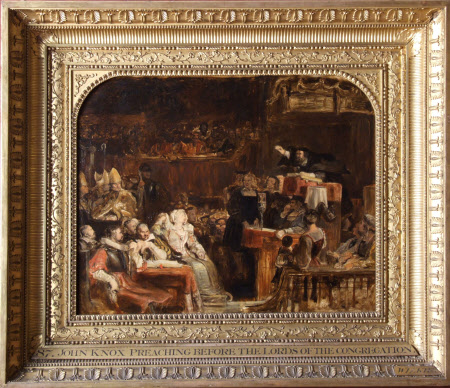 John Knox was a Scottish Protestant reformer and historian. After an exile of some thirteen years and in defiance of a threat of assassination, Knox preached his doctrine at St Andrews and persuaded those present to set up reformed worship in the town. Such was the influence of his doctrine that the provost, bailies and inhabitants harmoniously agreed to his demands. All the characters painted here are recognisable. This is a sketch for the painting now in the Tate, begun for the Earl of Liverpool and finished in 1832, when it was exhibited at the Royal Academy for Sir Robert Peel.

Oil painting on panel, John Knox preaching before the Lords of the Congregation, 10th June, 1559 by Sir David Wilkie, RA (Cults, Fife 1785 - at sea, off Malta 1841). Recording an event which took place in the parish church of St Andrew's in Fifeshire when John Knox, after an exile of thirteen years, defiantly appeared in the pulpit, right; the precentor, Thomas Wood, with an hour-glass below him; a woman with a baby in her lap beyond a rail along the right lower edge. At left centre, Lady Argyll, in a light buff dress looking up at Knox; at a red-covered table at left, nobles are seated with bishops beyond them. A gallery lies across the background with a large congregation. Wilkie wrote from Genoa on 1 June 1827, to Lord Egremont: “It will be in your lordship’s recollection that some years ago a sketch I made for Sir Willm Gordon of The Preaching of Knox before the Lords of the Congregation was by arrangement with him to be the property of Your Lordship as soon as I had done the finished picture. My protracted stay on the Continent however and still protracted illness induce me to wish to part with that sketch now. Should it therefore be agreeable to Your Lordship, I have instructed my Brother who will forward this to you, to order a Frame for it and to deliver it when and where you may be pleased to command.”

Bought by the 3rd Earl of Egremont (1751-1837) from Sir David Wilkie between 1827 and 1835. Thence by descent, until the death in 1952 of the 3rd Lord Leconfield, who had given Petworth to the National Trust in 1947, and whose nephew and heir, John Wyndham, 6th Lord Leconfield and 1st Lord Egremont (1920-72) arranged for the acceptance of the major portion of the collections at Petworth in lieu of death duties (the first ever such arrangement) in 1956 by H.M.Treasury.