A Landscape with Troglodyte Goatherds 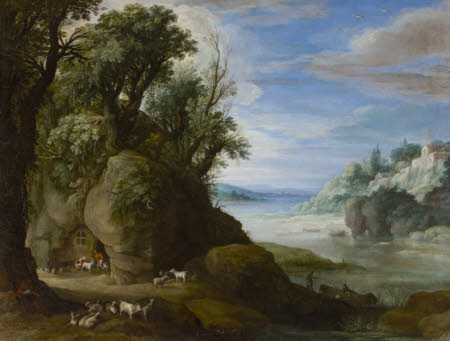 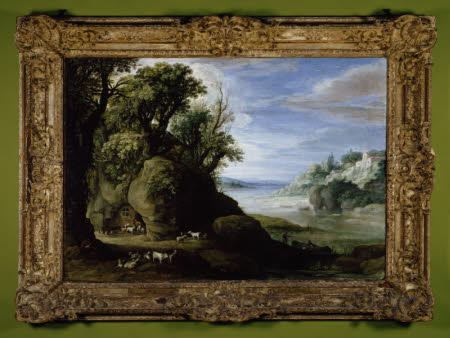 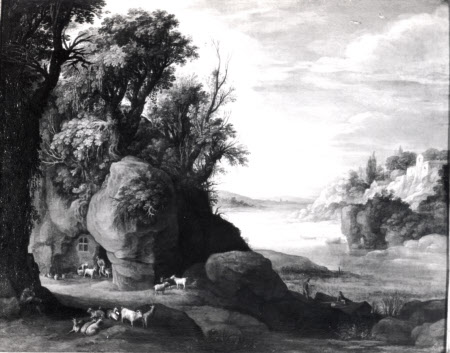 Bril was a Flemish painter who worked in Rome from the 1570s and was greatly influenced by Italian landscape paintings and in particular by Annibale Carracci. This painting was probably executed in around 1610-15 when Bril had begun work on a larger scale canvas having previously specialised in smaller pictures on panel or copper. It was bought in 1754 by the 2nd Earl for £126 and the frame is early eighteenth-century French.

Oil painting on canvas, A Landscape with Troglodyte Goatherds by Paul Bril (Antwerp 1554 – Rome 1626). 1610-1615. Landscape, on the left-hand side is a rocky landscape with trees and goats and, on the right, across a valley can be seen a building.

Acquired in 1730 by Jacques-Francois-Leonor de Goyon-Matignon, duc de Valentinois (1689-1751), hotel de Matignon, Paris (and put in its current frame); sold privately. Bragge's sale, Prestage's, 24-25 January, 1754, 2nd day, lot 63; bought by 'Anderson' on behalf of the 2nd Earl of Egremont for £126; thence by descent, until the death in 1952 of the 3rd Lord Leconfield, who had given Petworth to the National Trust in 1947, and whose nephew and heir, John Wyndham, 6th Lord Leconfield and 1st Lord Egremont (1920-72) arranged for the acceptance of the major portion of the collections at Petworth in lieu of death duties (the first ever such arrangement) in 1956 by HM Treasury.