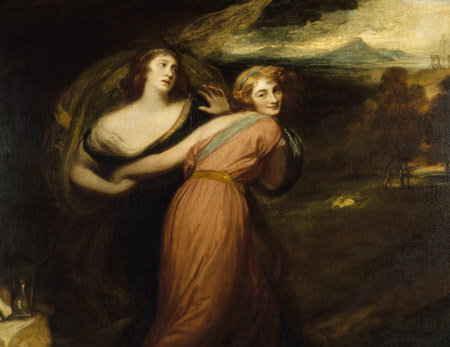 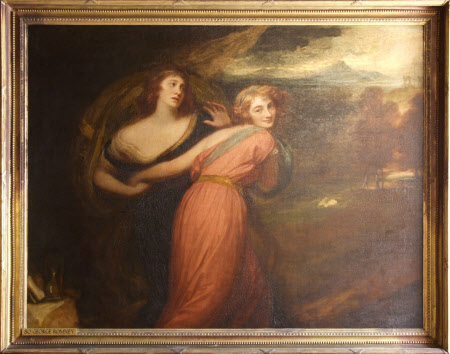 Oil painting on canvas, Mirth and Melancholy (Miss Wallis, afterwards Mrs James Campbell, fl.1789-1814) by George Romney (Dalton-in-Furness 1734 – Kendal 1802). 1788-1789. Mirth, wearing red, in the centre, looking over her right shoulder, drawing Melancholy forward; her left hand holds Melancholy's right. The latter, in black, is shown full front, her head three-quarters right against a sky background. Miss Wallis (fl.1789-1814) was the daughter of a country actor, born at Richmond, Yorkshire, and first appeared as a child with him, at the Smock Alley Theatre, Dublin (fl.1781-1798). She made her independent debut as 'Sigismunda' in Tancred and Sigismunda a tragedy by James Thomson (1700-1748) at Covent Garden in January 1789. From October of that year until October 1794, she performed in a vast variety of roles at Bath (and Bristol), and achieved vast popularity; so thronged was her benefit that the pit was converted into boxes - reputedly the origin of the dress circle. As 'Miss Wallis from Bath' she appeared in a further wealth of roles at Covent Garden from October 1794 to 1797, in which year (June or July) she married James Campbell of the 3rd Regiment of Guards. In 1813-14 she made an attempt at a comeback at Covent Garden and in Bath, as 'Mrs Campbell late Miss Wallis', but she failed to repeat her success, and thereafter disappeared from view. In connection with the present picture, it is worth quoting the Dictionary of National Biography's assessment that: "her comedy was pretty, but artificial and simpering."